Posted by Dwayne Yancey in News, Reviews, Uncategorized on May 16, 2020

Canadian playwright David Elendune has left this nice review of my one-act THE WEIRD SISTERS GO WEST on the New Play Exchange:

THE WEIRD SISTERS GO WEST
The three witches from Shakespeare’s Macbeth turn up in a western town and quickly bring order to the Old West, with a few complications along the way. Cast: Eight – four female, three male, one-non-gender.

Photos from staged reading for “Revenge of the Fairy Queen”

Posted by Dwayne Yancey in News, Photos, Uncategorized on September 27, 2018

In June 2018, I held a private staged reading for my script REVENGE OF THE FAIRY QUEEN. Dylan Kennedy Grey directed at the Bower Center for the Arts in Bedford, Virginia.

I have two wonderful photo galleries from this — one from Bobbie Daniels and one from, well, um, me. Hers are better.

REVENGE OF THE FAIRY QUEEN
The unauthorized sequel to Shakespeare’s “Midsummer Night’s Dream.” Titania realizes that Oberon has duped her into falling in love with a mortal transformed into an ass. Furious, she plots revenge, to be carried out on Midwinter’s Day. Her plot, though, goes awry and many complications ensue. Cast: 12 – 4 female, 5 male, 3 non-gender.

Backstage photos from “This Rose Has Thorns” in Australia

Posted by Dwayne Yancey in News, Photos, Productions, Uncategorized on May 16, 2018

Finally got around to downloading photos from my OTHER camera that I took to Australia to see the premiere of my play THIS ROSE HAS THORNS.

The cast and crew . . . and a visiting playwright. 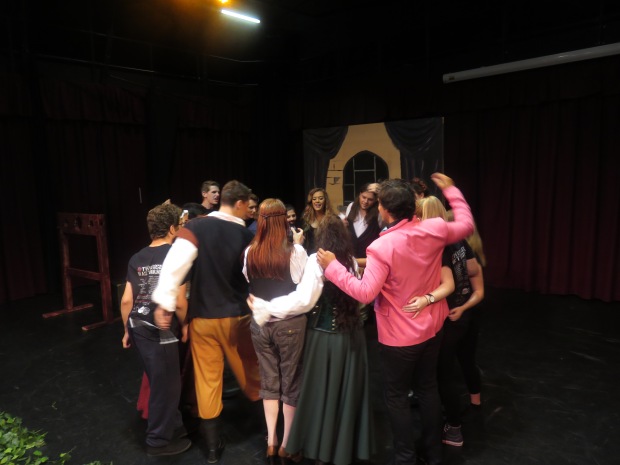 This was one of the most amazing sights I’ve seen: The cast gathers before the show for a pre-show rally, led by actor Nick Sidari (somewhere in the center of this scrum).

More on THIS ROSE HAS THORNS:

* Photos from the show

* Meet the cast and crew

* New poster for THIS ROSE HAS THORNS

* First round of posters

Video: “The One-Word Macbeth” in Australia

At long last, I have video from the 2015 production of my one-act THE ONE-WORD MACBETH by Pop Culture Theatre of Melbourne, Australia. The show –and the actresses who performed it — won a bunch of award that year in the Victorian Drama League competition. You can find a full list here.

Meanwhile, THE ONE-WORD MACBETH has gone on to be published by Brooklyn Publishers.

Photos from “The One Word Macbeth” in Australia

The Melbourne theatre company Pop Culture Theatre is producing my one-act THE ONE WORD MACBETH to enter in festivals around the state of Victoria over the coming months. The first production was July 25 in Macedon, Victoria.

The host theatre, Mount Players, tells me: “They were nominated for best production and best director. They won the youth encouragement award. Also, the girl who played Banquo won the VDL (Victorian Drama League) Most Promising Performer award. So it’s safe to say they did your work proud!” 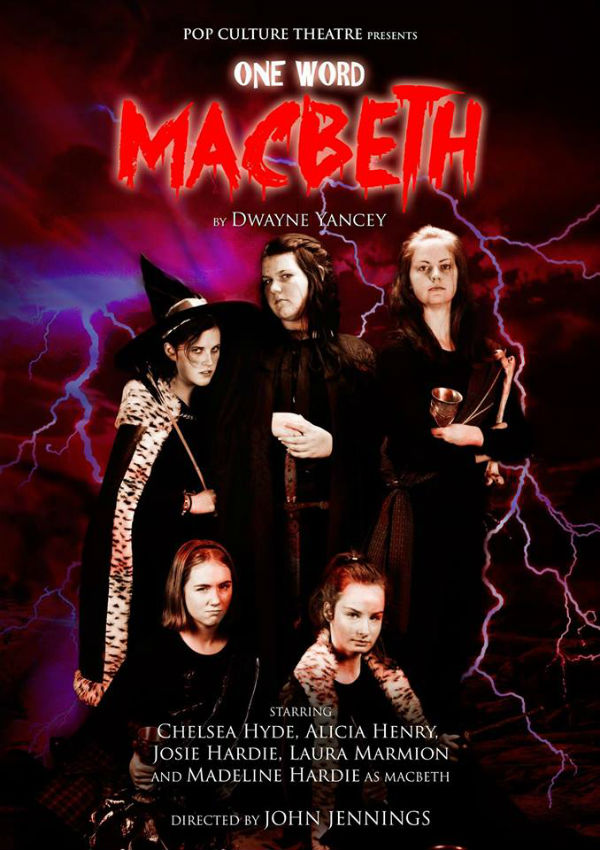 A cold weekend up in Macedon – cold, but fun! The Mount Players put on a great festival and were very welcoming to PCT for only our second outing down that way. All four of our plays went over well, as adjudicator Ray Hare was more than happy to tell all. “PCT strikes again!” he said, frequently, complementing us on our fine work, meeting the theatrical challenges of our scripts with nuanced performances and poignancy. All his words.

This weekend also saw our youth group hit the stage for the first time, with “One Word Macbeth”. And as you’ll see from the results, the kids sure came out swinging!

The Adjudicator chose not to give Adjudication awards.

Congratulations to all winners and nominees, and to all for another great festival. Now we have a short break before heading down to Foster in August for the South Gippsland Festival! Stay tuned for details about dates!

And also this note to me:

We are very proud of our girls. The adjudicator noted that on your description you called it a play for 10, 12 or 14. You may wish to revise that as it is very much possible with just 5.

They smashed it. The adjudicator refused to split the Best Youth Actress Award and so gave it to them jointly. They were also nominated for Best Production. Not Best Youth Production, but in the overall category.

And the audience loved it. Festivals are very much a theatre crowd and so everyone knows what is going on which makes the ‘Tomorrow’ section so funny. 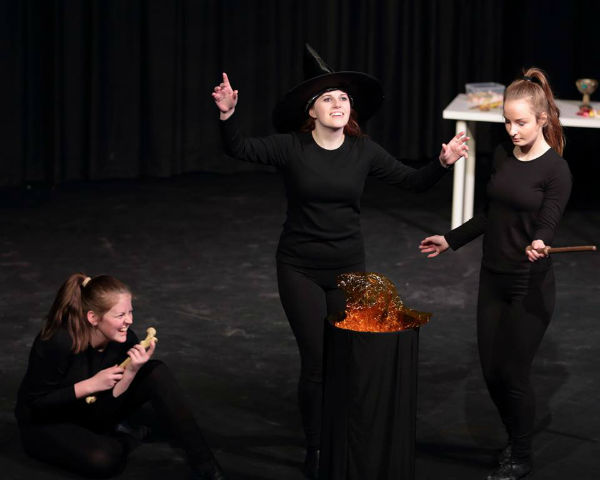 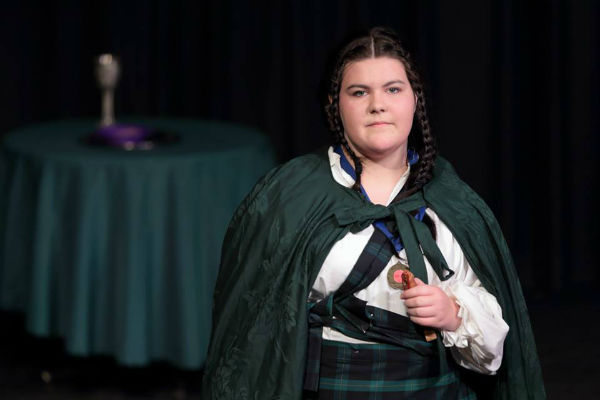 A great close-up of Macbeth.

END_OF_DOCUMENT_TOKEN_TO_BE_REPLACED

Photos from “Sweets to the Sweet” in suburban Chicago

Posted by Dwayne Yancey in News, Photos, Productions on February 4, 2014 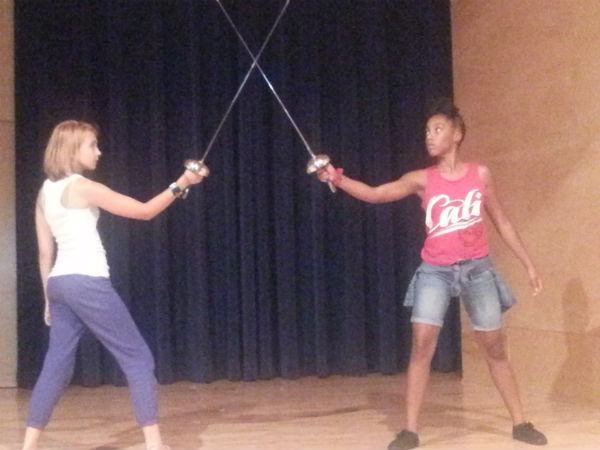 Hamlette (left) and Laurita (right) in their sword fight at the climax of “Sweets to the Sweet.”

In September, Gorilla Tango Theatre in Skokie, Illinois (an offshoot of the one in Chicago proper) staged my full-length script “Sweets to the Sweet.” At last, here are some photos from the show.

“Sweets to the Sweet” is my re-write of Shakespeare’s Hamlet. I’ve switched the genders — so Hamlet becomes Hamlette, Laertes becomes Laurita, Ophelia becomes Phil, Claudius becomes Claudia and so forth — and set the show in a modern-day slumber party. The language is modern, but includes all the famous Shakespeare lines. To me, it’s a way to help introduce audiences to the real thing. Plus, it creates a lot of female roles in what otherwise is a male-heavy show — and allows for some girls to try out stage combat.

Poster for “Sweets to the Sweet” in Chicago

Here’s the post that the Gorilla Tango Theatre in Skokie, Illinois (Chicago ‘burbs!) is using for my show “Sweets to the Sweet.” This is a modern version of Hamlet, with a gender-reversed cast — so Hamlet becomes Hamlette, Ophelia becomes Phil and so forth.

Alas, in converting this from a pdf to a jpeg, the photo lost a lot of quality. I assure you the original is quite spectacular, with a woman’s pensive eyes looking out . . . presumably Hamlette herself.

Sweets to the Sweet Final Poster

Posted by Dwayne Yancey in News, Productions, Uncategorized, Video on May 22, 2013

At the season finale for the reading series at the Liminal alternative artspace, I lucked out. Organizer Cara Modisett had multiple students interested in reading/performing, and I had multiple pieces available.

I also explored the question of my Lady Macbeth doesn’t have a name in my one-act, “Macbeth, the Prequel.” You can find video of a production of that script here.