Archive for category No Shame Theatre

Photos: “The Ancient Texts of Love” at No Shame Theatre

Posted by Dwayne Yancey in News, No Shame Theatre, Photos, Uncategorized on February 19, 2013

The mystic ponders the ancient texts.

Here are some photos of Darlene Fedele and Todd Ristau doing a staged reading of my short script “The Ancient Texts of Love” at No Shame Theatre in Roanoke, Virginia on Feb. 15, 2013. It’s a three-minute (or so) piece in which a woman seeks help from a mystic to cure her love life.

Unfortunately, the ancient text he consults is “snips and snails and puppy dog tails.”

No Shame is a weekly open-mic venue for original performance; the Roanoke one is just one of many around the country. 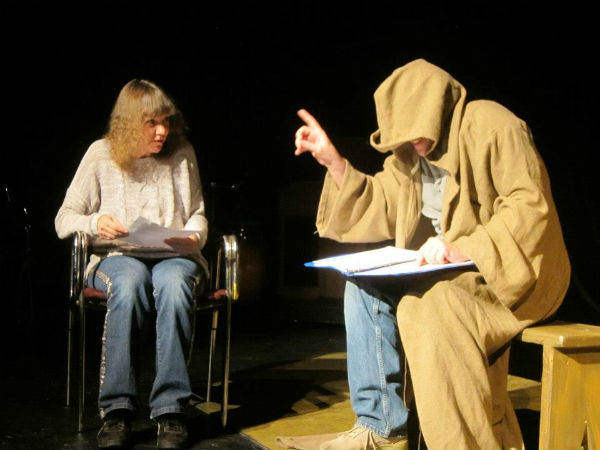 The mystic advises that he needs escargot. “In the vernacular, snails.”

The mystic’s robe began its life as a Jedi costume at Halloween for my son.

My short piece on school shootings

Posted by Dwayne Yancey in News, No Shame Theatre, Photos, Uncategorized on December 15, 2012 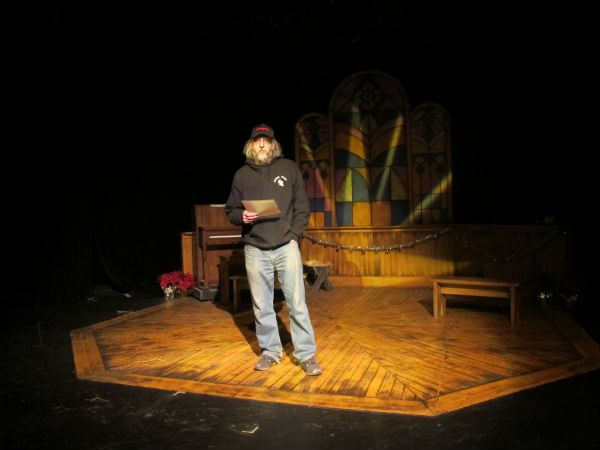 That’s me performing my monologue “Chalkboard Scribbled in Blood” at No Shame Theatre on Dec. 14, 2012.

Unlike some writers, I don’t write topical material. When some item in the news inspires me (and it’s quite often), I always try to write the piece in a way that it will work for future occasions.

For instance, after the horrific Virginia Tech shootings in 2007, I wrote the five-minute “Cellphones of the Dead,” which was performed that Friday night at No Shame Theatre in Roanoke, Virginia. It doesn’t reference Virginia Tech and could be staged again — although No Shame producer Todd Ristau said it was so powerful, it shouldn’t be performed too often. In fact, he said it was too powerful (and too much of a downer) to include in that year’s Best of No Shame Theatre.

After Friday’s equally horrific shootings at Sandy Hook Elementary School in Connecticut, I thought about bringing that piece back for an encore performance at No Shame Theatre. One problem — kindergarten students don’t have cellphones.

So while watching a rehearsal of my Christmas show, “Klaus,” I scribbled out a new piece. And I broke with my practice of having others perform my work — and performed this one myself. I’m no actor, and have never pretended to be, but thought perhaps those who known of my self-imposed prohibition on doing my own works would find the performance even more powerful then.

James Thompson was kind enough to take this photo of me performing the short monologue “Chalkboard Scribbled in Blood.”

Regrettably, it will fit the next time there’s another one of these awful events.

Behind the scenes of “Martian Beach Babes”

Posted by Dwayne Yancey in News, No Shame Theatre, Photos, Uncategorized on October 9, 2012

No Shame Theatre, the open mic theatre venue in Roanoke where I try out a lot of new work, recently marked its 9th anniversary in the Star City. To celebrate that, we held a Best of the Best of No Shame Theatre to show off work from nearly a decade of late-night original performance.

No Shame co-founder Todd Ristau asked if I would re-stage “Martian Beach Babes,” a piece I debuted at No Shame in July 2004 and which went on to be produced at New Frontiers Charter School in San Antonio in 2006. It’s not my best piece, by far, but I’ll admit it is visually stunning — two young women in green paint. Technically, it’s a scene about climate change. Demi and Phoebe (Mars experts will recognize them as derivatives of the moons Deimos and Phobos) can’t understand why high tide on Mars isn’t as high as it used to be, and why the sun’s rays seem stronger.

I’ve got another “green” piece — “The Women of Deep Space Pay a Visit To Earth and Don’t Like What They See” (since published by Eldridge Plays and Musicals) — but it needs four women and I only had two.

Hannah Whitt and Julia Moran, two of our regulars (indeed, our outgoing hosts), agreed to green up for the occasion. Here are a few shots of the process back-stage (with even more here on my flickr site): END_OF_DOCUMENT_TOKEN_TO_BE_REPLACED

Posted by Dwayne Yancey in News, No Shame Theatre, Photos, Uncategorized on October 1, 2012 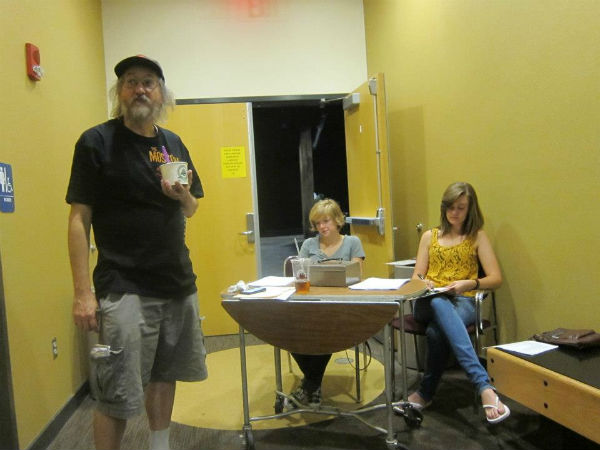 That’s me, before a recent No Shame, with Hannah Whitt and Julia Moran, our hosts, taking the order and handling the best office. As you can see, I’ve been to the frozen yogurt shop. Photo by Todd Ristau.

It’s time for the twice-a-year Best of No Shame Theatre, in which our local open mic theatre venue in Roanoke, Va. showcases some of its best work from the past six months.

This fall’s edition will be Friday, October 5. My entry is “Time for an Upgrade,” a monologue about how a teenage girl blackmails her mother into getting her a new cellphone. It will be performed by Hannah Whitt, who debuted the piece back in July.

This year, we also have a special twist. On Saturday, October 6, we’re doing a Best of The Best of No Shame, featuring pieces from the past nine years in Roanoke — a run-up to next year’s 10th anniversary.

My entry is “Martian Beach Babes,” which will be performed by Hannah Whitt and Julia Moran. It’s about Mars losing its water, a topic now back in the news with Curiosity’s discovery of an ancient streambed on the red planet.

That piece was first done at No Shame back in July 2004, when we weren’t even a year old, and then was produced in 2006 at New Frontiers Charter School in San Antonio, Texas. No Shame producer Todd Ristau asked me to reprise it because it is a visually stunning piece when done with the proper customing. Ideally, I’ll have photos from the performance to show off as proof. 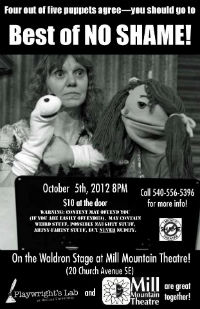 That’s Darelene Fedele, a puppeteer and one of our regulars. 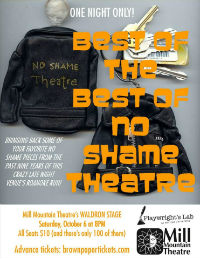 The poster for our 9th anniversary show.

best of no shame, Martian Beach Babes, no shame theatre, Time For an Upgrade

“Bored and Cruising at 37,000 Feet” at Labyrinth Festival

Posted by Dwayne Yancey in No Shame Theatre, Uncategorized, Video on January 19, 2012

When my daughter was studying overseas, we used to make regular trips to Dulles airport to pick her up or deliver her. That led to several airplane-related pieces, including this one: “Bored and Cruising at 37,000 Feet.”

It was originally performed at No Shame Theatre in Roanoke. This video is from a special No Shame engagement at the Labyrinth Festival in Roanoke, Va. in March 2011.

000 feet, bored and cruising at 37, labyrinth festival, no shame theatre

“The Happiest Place in America” in San Luis Obispo, California

Posted by Dwayne Yancey in No Shame Theatre, Uncategorized, Video on January 19, 2012

I read a newspaper story that said a survey found that the happiest place in America was San Luis Obispo, California.

Conveniently, there’s a No Shame Theatre there and they were kind enough to do this reading of my one-minute script on January 28, 2011.

no shame theatre, the happiest place in america

“The Genie In The Lamp”

Posted by Dwayne Yancey in No Shame Theatre, Uncategorized on January 19, 2012 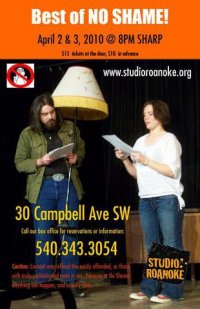 This was the poster for The Best of No Shame Theatre in April 2010 in Roanoke. That’s Ben R. Williams and “Jax” performing my five-minute piece “The Genie in the Lamp” in November 2009.

no shame theatre, the genie in the lamp

The Best of No Shame Theatre, October 2009

Posted by Dwayne Yancey in No Shame Theatre, Uncategorized on January 18, 2012

That’s me at The Best of No Shame Theatre in October 2009 at Studio Roanoke.

I was running the light board.

Alas, the colorful scarf blew away in windy snowstorm. I never could find it.

best of no shame theatre

Posted by Dwayne Yancey in No Shame Theatre, Uncategorized on January 18, 2012 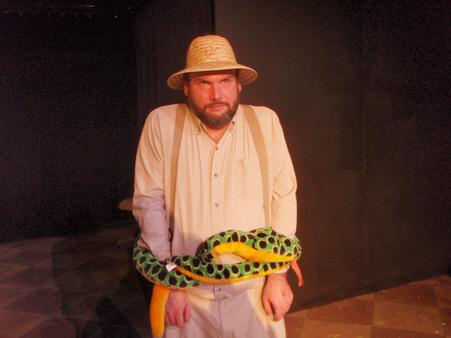 A dark five-minute piece about why lies are dangerous. The men in a 19th century British expedition into the African jungle stage a mutiny against their captain, and hit upon an ingenious way to keep their stories straight. They have him squeezed to death by a boa constrictor. That way they can say none of them lifted a hand against him.

“The Tragic and Gruesome Death of Captain Alexander Fairweather, African Explorer” was performed at No Shame Theatre in Roanoke, Va. on September 18, 2009.

The idea behind this led to my full-length script, “Fairweather Friends,” which has since been published by Eldridge Plays and Musicals.

Posted by Dwayne Yancey in No Shame Theatre, Uncategorized, Video on January 18, 2012

A staged reading of a short Christmas scene — “Kids Say the Damnedest Things” — at No Shame Theatre, Roanoke, Va., in November 2008.

That’s Mike Allen as the devil and Keith Yancey as the kid.