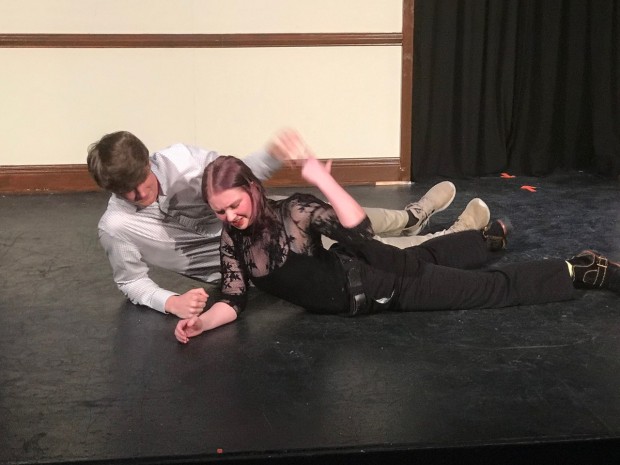 They’re both at Lover’s Leap, trying to jump off but run into each other. Injuries result.

My 10-minute play THERE’S A REASON WHY THEY CALL IT FALLING had its premiere in February at South Walton High School in South Walton, Florida. A lot more photos here. 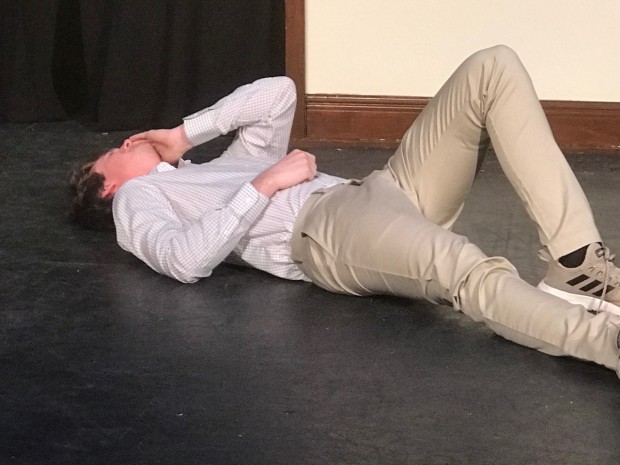 You know that really hurts. 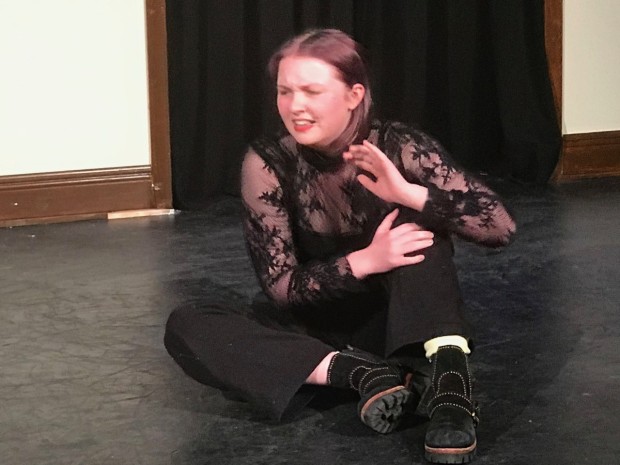 But she has a different plan.

Photos from ‘The Four Horsemen of the Internet’ in Florida

My 10-minute play THE FOUR HORSEMEN OF THE INTERNET — which recently completed a run in a festival in New York — was also in a festival at South Walton High School in South Walton, Florida. You can see the full photo gallery here. 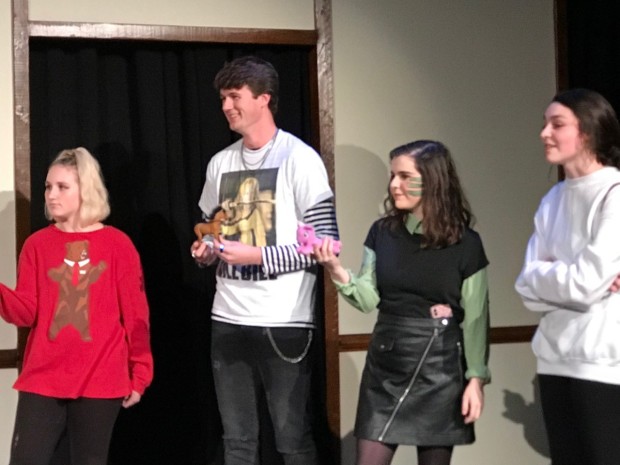 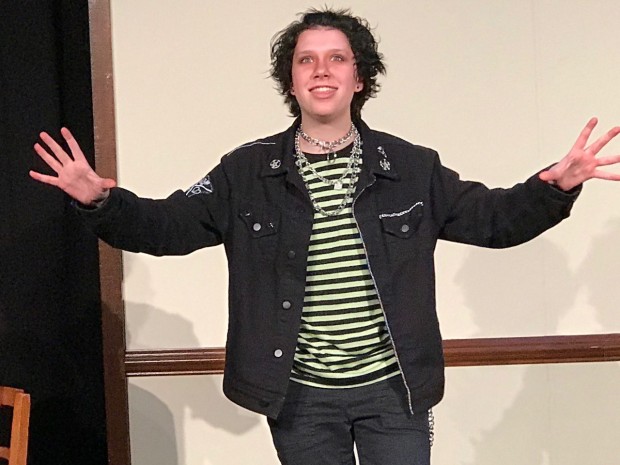 Photos from ‘Troubleshooting’ in Florida 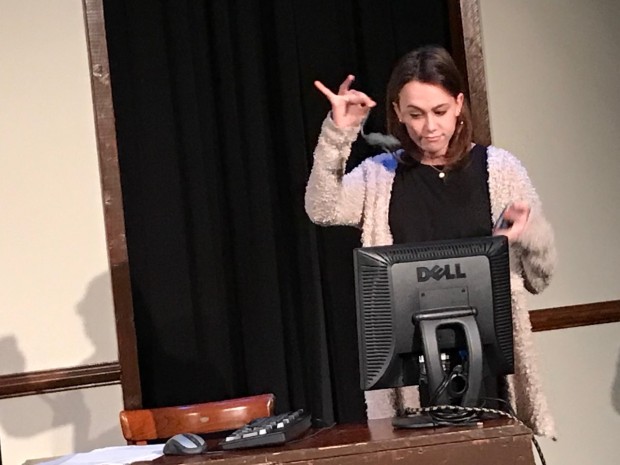 Jiggle the mouse, he said.

My 10-minute play TROUBLESHOOTING — which previously won an award in Australia that I couldn’t accept — was produced by South Walton High School in South Walton, Florida in February. The full photo gallery is here.

The show is set up to be gender-neutral. In Australia it was done with two women. Here the characters were Marie, the office worker, played by Molly Turner, and Tyler, the IT help desk, by Spencer Eichberger. 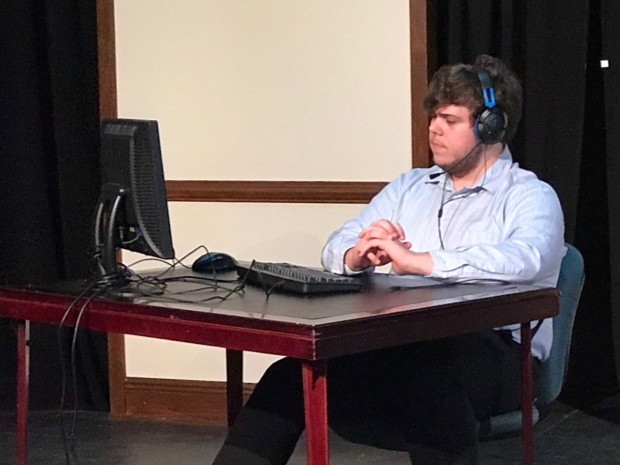 Of course, he’s not going to bother coming to the cubicle when he can do it over the phone.

This will take care of the problem, for sure.

Here’s another photo and the poster.

My 10-minute play SOMEWHERE TONIGHT, THE WASHINGTON SENATORS’ LAST GAME PLAYS ON — now playing at the Garfield Center in Chestertown, Maryland — got a nice mention in a review in the Chesterown Spy.

The full link is here but these are the key passages:

“Jim Landskroener plays a baseball fan who’s been arrested for breaking and entering by a local cop, played by Paul Cambardella. The fan unfolds his story, revealing how the legacy of the woeful Senators last game – which was interrupted in the 9th inning by fans rushing the field to grab souvenirs – lingers on. It’s a clever bit of historical whimsy, and Landskroener does his usual fine job of bringing the character to life.”

“My particular favorites this year were “Singing in the Shower,” “The Philosophy of Dogs” and “The Last Washington Senators’ Game,” along with “Rosa’s Eulogy” from the one-minute plays, but others may be more to your taste.”

Photos from “The Sandstorm” in Texas

Posted by Dwayne Yancey in News, Photos, Productions, Uncategorized on May 22, 2017

My 10-minute play THE SANDSTORM was produced May 12, 2017 at Rockwall Heath High School in Heath, Texas.

The inspector interrogates a government official about discrepancies in his account. 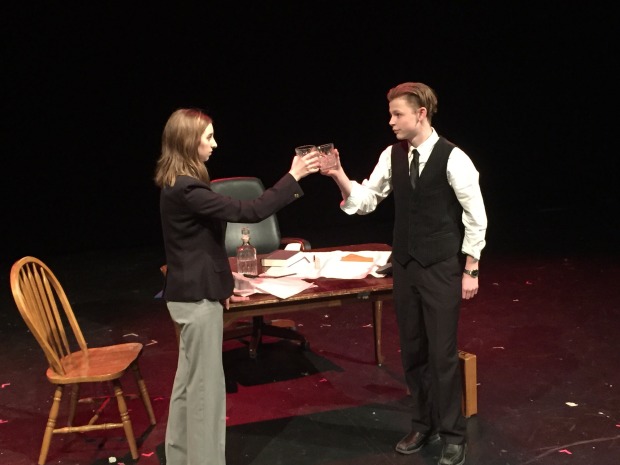 They’re Martians. He’s siphoning off money to pay for a vault to store Martian artifacts after the planet’s oceans dry up and no life remains. They drink a toast of Martian water.

THE SANDSTORM
A dark vision from the last days of Mars. A local official in charge of building canals instead diverts some of the money to build an underground library to store his civilization’s artifacts because he knows Mars is doomed. Cast: Two non-gender.
* Produced by Otherworld Theatre, Chicago, Illinois, July 2015.
* Produced by Rockwall Heath High School, Heath, Texas, May 2017.

Here’s video from the Chicago production.

Poster for staged reading of “Olga” in New York

Posted by Dwayne Yancey in News, Productions, Uncategorized on December 5, 2014

Here’s the poster for the staged reading of my 10-minute play OLGA, which will be part of a festival of short plays about women in history in New York on Sunday, December 14.

The Olga in question is Olga Romanova, the first victim of the Moscow theatre seige in 2002. I have a full-length play about that event — 57 HOURS IN THE HOUSE OF CULTURE — which was staged in Roanoke in 2012 and has come oh-so-close to being staged at two other theatre since then. (Here’s a link to more about 57 HOURS.)

This 10-minute play is not a cutting, but a spin-off that focuses on one of those characters.

This festival is put on by the Mad & Merry Company, and will be at the IRT Theatre at 154 Christopher Street #3B in Manhattan (West Village, or thereabouts) on December 14. Showtime is 7 p.m. Admission is free, but $5 donation suggested.

I’m told that space is limited, so if you’re interested in going, please email madandmerrytheatreco@gmail.com to reserve a spot. Here’s some more on OLGA.

“Sometimes Elephants Die Standing Up” to be produced in London

Posted by Dwayne Yancey in News, Productions, Uncategorized on June 20, 2014

My 10-minute play SOMETIMES ELEPHANTS DIE STANDING UP will be produced in London this September by Ghost Dog Productions. It will be part of an evening of plays on the theme of “deception” produced Sept. 22-24 at The Horse & Stables, which appears to be on Westminster Bridge Road in the Waterloo section of London.

This will be the first production of the script, although it had a staged reading last month, also in the U.K. — that one in Scotland through Unproduced Moon.

SOMETIMES ELEPHANTS DIE STANDING UP
Two lowly circus workers try to figure out what to do with an elephant dies. An absurdist look at how the economy works. Cast: Two males. Running time: Ten minutes.

Scripts to be performed in New York and Scotland

Posted by Dwayne Yancey in News, Productions, Uncategorized on May 19, 2014

I have good news to report:

* My one-minute play IT’S THE COW’S FAULT is among those included in this year’s “Gone in 60 Seconds Festival” of one-minute plays, to be produced June 13-15 in New York City. I’ve been thrilled to be part of this festival in the past and it’s great to be back for another year. Here are photos and video from last year’s entry, FISHING FOR MEN.Out of that, the festival producers created this short film version for a different competition. Also, last year I had three scripts in the festival’s UK version. Here are rehearsal photos from THIS IS THE CAPTAIN SPEAKING.

* Meanwhile, my 10-minute play SOMETIMES ELEPHANTS DIE STANDING UP will have be performed May 23 in Scotland by the Produced Moon company. (I’m a little uncertain whether it’s a staged reading or a full production; pretty sure it’s a staged reading. And I’m not sure whether it’s in Edinburgh or Glasgow; the company produces in both cities.) This will be my first performance of any sort in Scotland.

Here are the synopses:

SOMETIMES ELEPHANTS DIE STANDING UP
Two lowly circus workers try to figure out what to do with an elephant dies. An absurdist look at how the economy works. Cast:  Two males. Running time: Ten minutes.