Video: “The Truth About Broccoli” at Liminal

Posted by Dwayne Yancey in News, Uncategorized, Video on October 28, 2013

Katerina Yancey and Jonah Woodstock performed a staged reading of my short piece “The Truth About Broccoli” at the monthly reading series at the Liminal alternative artspace in Roanoke.

The broccoli appeared as itself.

The theme, by the way, was “eat your words.”

Ashley Meador and Will Griswold, students at Community High School, perform a staged reading of my short script “Buzzard Angst” at the monthly reading series at the Liminal alternative artspace in Roanoke, Va.

Mine fits, if you consider talking buzzards natural.

This is one in a series of short pieces I have about buzzards; and I have a full-length script, still in the editing staged, called “The Talking Buzzard.”

Video: “The Cherry Tree Near Loos” at Liminal gallery

Here’s another video I’m a little late in posting. The Liminal gallery in Roanoke, Va. hosts periodic readings, often in conjunction with an exhibit or classwork at Community High School, the private school with which it is associated.

On March 27, 2012, the theme was “place.” Community High School student Sahar Babi read my monologue “The Cherry Tree Near Loos.”

It’s a true story that I came across in reading once about World War I. A British soldier was killed in a tree in no man’s land, and the only way the British could retrieve his body was to bombard the tree.

I’m indebted to Cara Modisett, who organizes the readings, for finding someone to read the piece.

Poster for “The Christmas Goat” at Studio Roanoke

Posted by Dwayne Yancey in Photos, Uncategorized on January 19, 2012

Here’s the poster that Studio Roanoke (in Roanoke, Va.) used for a collection of my short Christmas pieces, which played under the title “The Christmas Goat and Other Inappropriate Holiday Tales” on Dec. 11, 2011.

This was part of Studio Roanoke’s “underground” Guerrilla Playhouse program.

These were directed by Ashley Byrne of Lynchburg.

Photos from the “My Kid Could Paint That” video

Posted by Dwayne Yancey in Photos, Uncategorized on January 18, 2012

Cate Leonard (art dealer) and Mike Allen (art buyer) eye some "artwork," which looks suspiciously like it was once a dog. (Or a cat. But we had a dog prop.)

I collaborated with Salem,Va. filmmaker Hank Ebert to make a short video out of my script “My Kid Could Paint That.”

You can find the video here. These are some stills from that film, which played in a festival at the Grandin Theatre in Roanoke, Va. in spring 2009: END_OF_DOCUMENT_TOKEN_TO_BE_REPLACED

five-minute script, grandin theatre, my kid could paint that, video

Posted by Dwayne Yancey in No Shame Theatre, Uncategorized, Video on January 17, 2012

Whenever there’s a bad crime, it seems the neighbors always say the suspect seemed strange in some way. But what if someone’s just strange and not a criminal?

Here’s my take: “He Never Barbecues.” This was a staged reading at No Shame Theatre, Roanoke, Va., in June 2007.

“The Corporate Tribe and the Invention of Fire” at City Circle, Iowa

Posted by Dwayne Yancey in Photos, Uncategorized on January 17, 2012 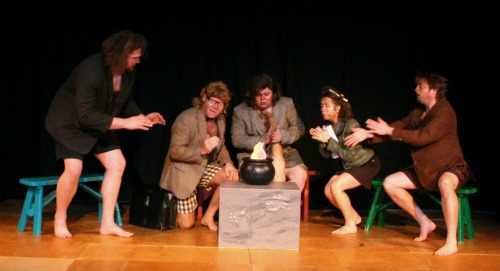 I’ve written several short pieces spoofing the corporate world by setting them in the caveman era. One of them is “The Corporate Tribe and the Invention of Fire,” which was performed February 2007 by the City Circle Acting Company in Coralville, Iowa.

“Putting the Fair in the Tooth Fairy” at North Park Vaudeville, San Diego

Posted by Dwayne Yancey in Photos, Uncategorized on January 16, 2012 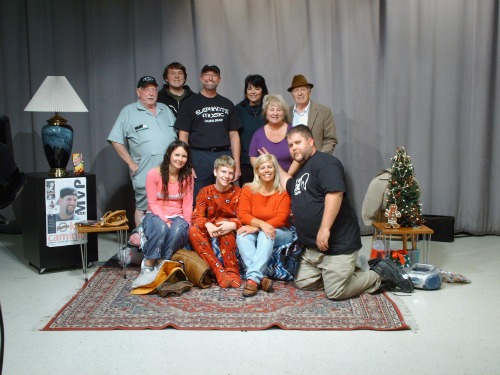 “Putting the Fair in the Tooth Fairy” is a five-minute scene that began life at No Shame Theate and has since been produced elsewhere, including this October 2006 festival at North Park Vaudeville and Candy Shop in San Diego.

Posted by Dwayne Yancey in No Shame Theatre, Uncategorized on January 15, 2012

The cast members painted themselves green. That’s me at right.

The cast members of “The Women of Deep Space Pay a Visit to Earth and Don’t Like What They See” went above and beyond the call of duty for this staged reading at No Shame Theatre in Roanoke, Va. in May 2005.

They painted themselves green!

The script has since been published by Eldridge Plays and Musicals in the collection “24/7.”

No Shame Theatre is a weekly late-night, open mic event for theatre types. There are branches all over the country; I’m a regular at one in Roanoke, Virginia. 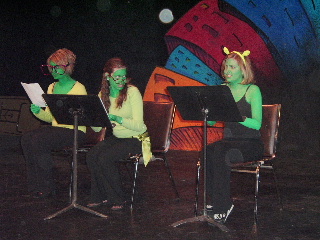 The Women of Deep Space.

eldridge plays and musicals, five-minute script, no shame theatre, the women of deep space pay a visit to earth and don't like what they see

“The Year Dad Finally Lost It at Christmas”

Posted by Dwayne Yancey in No Shame Theatre, Uncategorized on January 14, 2012

That's me at left playing myself.

I rarely perform in my own work. I don’t claim to be an actor. Plus, I like to see my own work, partly so I can critique it. But my five-minute piece “The Year Dad Finally Lost It At Christmas” seemed like own where I should play myself.

This was done at No Shame Theatre in Roanoke, Va., in December 2004. That’s my wife, Trina, and my son, Keith. In the final photo, Simon Adkins is the neighbor dressed as Santa Claus. 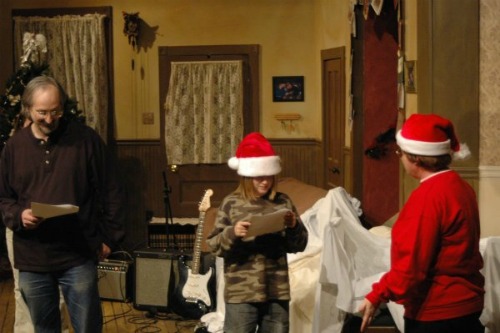 five-minute script, no shame theatre, the year dad finally lost it at christmas