Review for ’57 Hours in the House of Culture’

Posted by Dwayne Yancey in News, Other, Reviews, Uncategorized on December 14, 2018

Here’s a nice review of my play 57 HOURS ON THE HOUSE OF CULTURE that’s been posted on the New Play Exchange:

“This is probably my favorite Yancey play. High stakes, rich characters, an immersive theatre environment — what’s not to like? You certainly don’t need to know recent Russian history to appreciate this effort. Be sure to give it a look.”
— Kenley Smith

57 HOURS IN THE HOUSE OF CULTURE
An audience once died simply for its love of theatre. This is a dark play that re-imagines the 2002 Moscow theatre siege, where Chechen terrorists seized a theatre and held hundreds hostage until Russian authorities gassed everyone. Audience members are held in the lobby, while “soldiers” guard the doors. At showtime, the doors open and patrons enter to find the theatre swirling with poison gas (presumably, you’ll use dry ice), seats overturned, and dead bodies strewn about, while a broadcast announcement plays about the end of the hostage drama. When everyone is seated, the dead bodies come to life, as theatre ghosts, re-telling the tale. Cast: This has been done with as few as nine. Eight main cast members — two male, four female, two non-gender — plus two male soldiers – plus five to seven audience members who are enlisted. And some voices, which can be recorded. Running time: One and a half, no intermission.
* Produced by Studio Roanoke, Roanoke, Va., May 16-27, 2012.
* Staged reading at Sweet Briar College, Sweet Briar, Virginia, March 19, 2016.

More, lots more, about 57 HOURS IN THE HOUSE OF CULTURE: END_OF_DOCUMENT_TOKEN_TO_BE_REPLACED

Poster for showcase in London 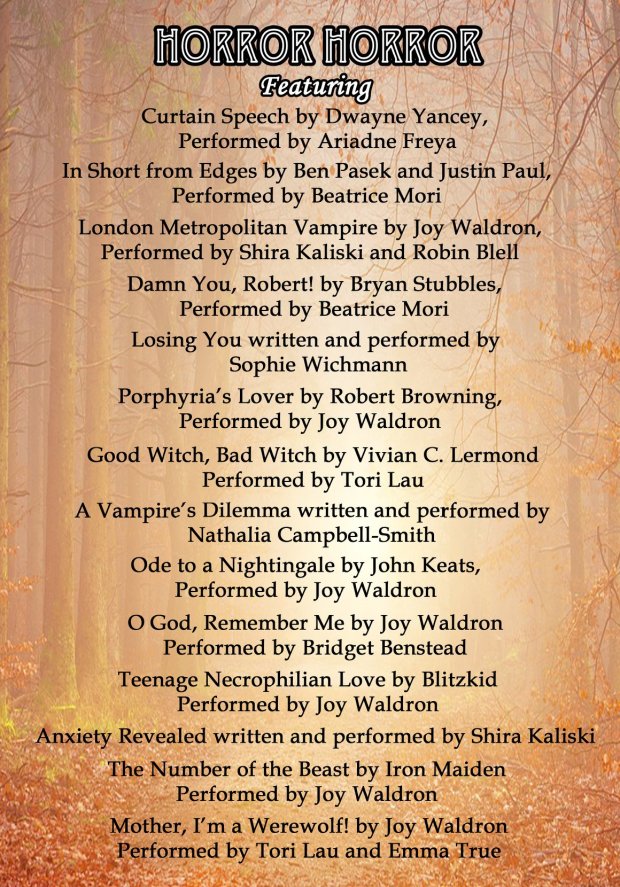 I have one piece in the one-night show Horror Horror, being presented Oct. 28 in London (yes, that London) by Bashir Productions at the Et Cetera Theatre as an industry showcase.

Posted by Dwayne Yancey in News, Productions, Uncategorized on March 15, 2016

Poster for the Sweet Briar reading.

My dark play about the Moscow theatre siege comes back to life on March 19 with a staged reading at Sweet Briar College in Virginia.

I would say it comes back to the stage, except this time it won’t be on a stage, it’ll be in an art gallery, where the backdrop is an exhibit on Soviet propaganda. Very fitting!

Here’s what Sweet Briar has posted on its website about the reading (and about me.)

Here’s more about 57 HOURS IN THE HOUSE OF CULTURE below: END_OF_DOCUMENT_TOKEN_TO_BE_REPLACED

Artistic director: ‘You are quite a talent!’

Posted by Dwayne Yancey in News, Reviews, Uncategorized on July 21, 2015

“You recently submitted a number of plays to our festival and I had the pleasure of reading some of them. I really enjoy your work. To be honest, each time I’d open up a play and see your name attached to it, I’d get excited. You are quite a talent! Although I won’t be directing anything for this year’s festival, I wanted you to know that if I had, I would’ve chosen your play Olga. It’s a great piece.”

The director went on to ask if she could share the script with a friend. Naturally, I said yes!

OLGA is a 10-minute play based on Olga Romanova, a civilian who came in off the street during the 2002 Moscow theatre siege — and wound up becoming the first victim. It had a staged reading in December in New York. That script is a spin-off from my full-length script about the Moscow theatre siege, 57 HOURS IN THE HOUSE OF CULTURE. More on that show here.

Posted by Dwayne Yancey in News, Reviews, Uncategorized on November 19, 2013

Just got one of the nicest rejection letters ever, this from a theatre in . . . well, let’s just say somewhere in the United States.

This was in reference to my full-length script “57 Hours in the House of Culture,” about the Moscow theatre siege.

“I did want to let you know that out of the 200 submissions we considered, 57 Hours in the House of Culture made a very strong impression and stayed on our shortlist until close the very end. It is a well-crafted story told in a compelling manner with characters that are diverse and strong. However, due to the larger cast size along with technical elements we felt were essential to telling this story correctly, we had to pass on it this year. However, we look forward to considering it again next year, along with any other work you submit in the future.”

The show was originally produced in May 2012 at Studio Roanoke in Roanoke, Virginia. Here’s more on that production:

Photos from “57 Hours in the House of Culture”

Posted by Dwayne Yancey in Productions, Uncategorized on June 5, 2012 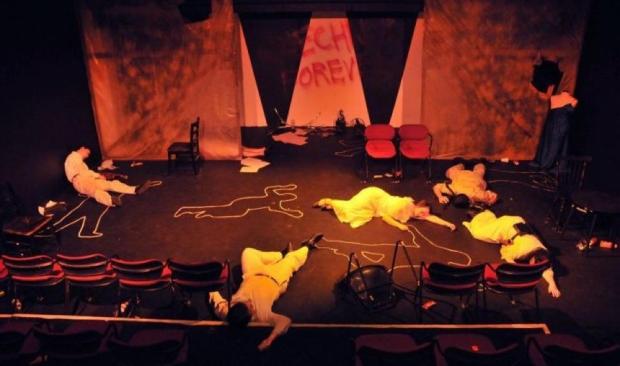 From left: Dmitri the musician, Olga the cosmetic clerk who entered the theatre (whose legs are visible),  Ivan the usher, Irina an audience member, Barayev the terrorist and Fatima the Black Widow. Not visible are audience members Andrei and Svetlana).

Here are the official production photos (courtesy of David Gross) from my show about the Moscow theatre siege, “57 Hours in the House of Culture,” that was produced at Studio Roanoke in May 2012.

Audience reaction to “57 Hours in the House of Culture”

Posted by Dwayne Yancey in Productions, Reviews, Uncategorized on June 2, 2012

The “wreckage” of the theatre. The audience entered to find chairs overturned and the space littered with programs (in Russian), water bottles and candy wrappers.

The goal of the recent Studio Roanoke production of my script about the Moscow theatre siege — indeed, the goal of the script itself — was to make people feel like they were really there.

So the audience entered the lobby to find . . . a video of the actual production of “Nord-Ost” playing on a television screen . . . still photos of the Moscow production were posted . . . audience members were handed a program that was in Russian . . .and two soldiers in Russian military garb blocked the doors until showtime — when they quickly donned gas masks, threw open the doors and ran into the theatre space.

As audience members followed, they found cast members “dead” around the theatre . . . chairs overturned, and the floor littered with debris — water bottles, candy wrappers. I am indebted to Kenley Smith, Studio Roanoke’s founding patron and playwright in residence, for helping me visualize all of this, and to director Brian O’Sullivan for pulling it off.

I attended almost every night of the show (my son’s baseball schedule kept me away on two nights.) Most of the audience members I heard from “got” the concept; a few did not. One night, one woman sniffed “they didn’t do a very good job cleaning up the theatre after the last show” and appeared to be completely serious. Another night, one audience member, on his way out, started picking up the trash!

Other reactions: I’m told one audience member wiped away tears on opening night when Olga was shot. And I was there another night when a woman suffered a panic attack as soon as she entered the space and declined to see the show.

Here’s a summary of some other feedback that people have posted on Facebook: END_OF_DOCUMENT_TOKEN_TO_BE_REPLACED

57 Hours in the House of Culture, moscow theatre siege

Scripts accepted for productions in New York and Roanoke

Posted by Dwayne Yancey in News, Uncategorized on May 20, 2012

My show on the Moscow theatre siege  — “57 Hours in the House of Culture” — is off to a fantastic start at Studio Roanoke. And now I have other production news to report:

* Studio Roanoke has announced its new season, and my Christmas show about the origin of Santa Claus, is among of the offerings. “Klaus” isn’t something for the children. It attempts to explain where Santa Claus came from. Here’s the description I wrote for Studio Roanoke’s calendar:

A holiday play for a mature audience, it is a dark and humorous tale of the origin of Santa Claus. Where did he come from? Set in the early 1700s when the Jacobite movement to overthrow the German-born Hanoverian kings of England and restore the ousted Stuart family to the throne was still very much alive, and involves physics, philosophy, treason against the king, a love story, and some cooking.

Studio Roanoke is also extending the shows in its next season from two weeks to three, reflecting a popular demand for more weekend shows (and fewer weekday ones.)

You can find the entire season on the Studio Roanoke website.

* Meanwhile, I’ve also had two pieces accepted into the annual “Gone in 60 Seconds” festival in New York City. This is a festival dedicated to one-minute plays. This year it runs June 8-9 at Brooklyn College. Both of my scripts accepted this year deal with baseball: “The Uniform” and “Sunset in North Dakota.” The latter is a one-minute version of a five-minute piece that I had done at No Shame Theatre in Roanoke, Va. last summer.

These upcoming productions join ones previously announced for other scripts in Maryland and Oregon.

Review for “57 Hours in the House of Culture”: “It ain’t Oklahoma!”

Posted by Dwayne Yancey in News, Productions, Reviews, Uncategorized on May 20, 2012

Dan Smith — editor of Valley Business Front — has posted this review of “57 Hours in the House of Culture,” my show about the Moscow theatre siege,” on his personal blog.

Some of the key thoughts:

“I’ll simply say that this one was not my cup of tea, but I applaud everybody involved for their work and their obvious passion. Most of those in the audience seemed to thoroughly enjoy the production.
Give it a shot. It ain’t “Oklahoma” but it ain’t supposed to be. This is real theater.”

There was a previous review from Heather Brush of the Cave Spring Connection who called the show “the most interactive show I’ve seen.”

57 Hours in the House of Culture, moscow theatre siege

Congressman attends “57 Hours in the House of Culture”

Posted by Dwayne Yancey in News, Personal, Photos, Productions, Uncategorized on May 19, 2012 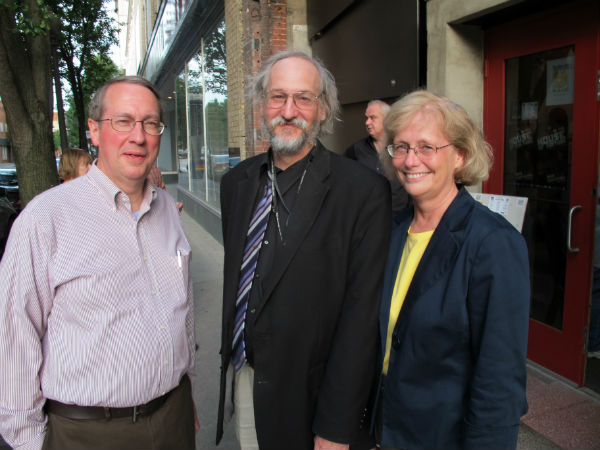 We had nearly a full house for the first Friday night of “57 Hours in the House of Culture,” my show about the Moscow theatre siege now playing at Studio Roanoke.

Among those attending was Roanoke’s congressman — Rep. Bob Goodlatte, R-Roanoke County — and his wife, Maryellen.

The Goodlattes are noted theatre-goers. About a year ago, they attended the Attic Productions youth show to see my one-act, “Curiosity Killed the Cat.”

The congressman said he took notes so he could do more research on the Moscow theatre siege.