Two short pieces to be produced in New York festival

Posted by Dwayne Yancey in News, Productions, Uncategorized on May 16, 2016

Two of my short scripts will be produced in the Gone in 60 Seconds Festival of one-minute plays, which will be held June 9-11 at Brooklyn College in New York.

The scripts are the comedy THE BIGFOOT SIGHTING and the more somber A MOMENT OF SILENCE.

If you’re counting, and I am, that means already this year I’ve had (or soon will have) productions in New York, Chicago and Los Angeles. I’ve been fortunate to have had scripts in this festival for several years running now.

Curiously, both of my scripts accepted this year deal with television news:

THE BIGFOOT SIGHTING
A TV reporter interviews a professor, who doubts the existence of Bigfoot, even though one is jumping around all over the stage. Cast: Three or more – one male, two or more non-gender.

A MOMENT OF SILENCE
A minister presides over a moment of silence following some tragedy. Except there is no silence, because of all the TV news crews talking. Cast: Four, all non-gender.

You can find the full list of scripts in this year’s festival here.

END_OF_DOCUMENT_TOKEN_TO_BE_REPLACED

Here is: THERE ARE NO CELLPHONES IN SHAKESPEARE and AN UNEXPECTED CHEESE PARTY:

Photo from “An Unexpected Cheese Party” in New York

Posted by Dwayne Yancey in Photos, Productions, Uncategorized on June 29, 2015 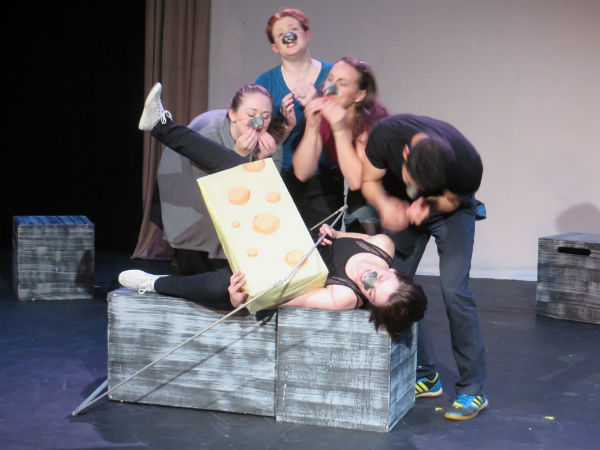 From left: Catleen Kelly, Katherine Harte DeCoux, Julie Orkis, not sure, and, as the dead mouse, Anastasia Bell.

Here’s a photo from AN UNEXPECTED CHEESE PARTY, which was produced June 11-13 in New York as part of the Gone in 60 Seconds Festival of one-minute plays.

This involves, as you can see, a dead mouse.

I had two scripts in the New York festival, plus three in the related youth festival, and two more in the British version of the festival. You can read about all those here.

Video of “Fishing for Men” at Gone in 60 Seconds Festival

Posted by Dwayne Yancey in Productions, Uncategorized, Video on October 1, 2013

Here’s the video of my short piece “Fishing for Men,” as performed in this year’s Gone in 60 Seconds Festival of one-minute plays at Brooklyn College in New York.

This is not to be confused, of course, with the short film version of the same piece.

I also have still photos from the same production. 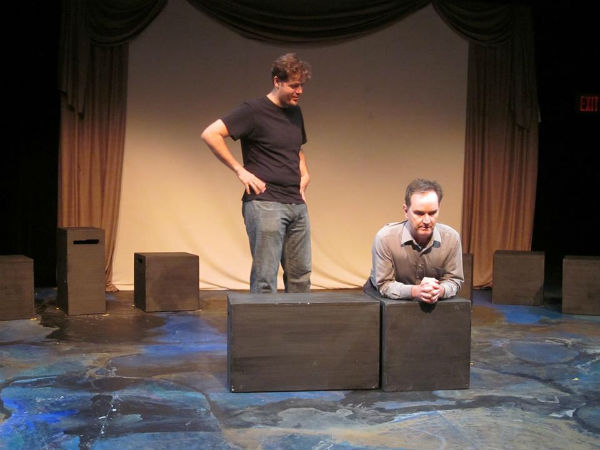 Here are some photos, courtesy of Rose Bonczek. That’s Chris Donovan at left as “Sunny” and Mickey Ryan at right as “Brooder.”

The pictures tell the story — although if you want the synopsis, it’s here.

I also had three scripts done in the U.K. version of the same festival; details on that here with a rehearsal photo from England here. 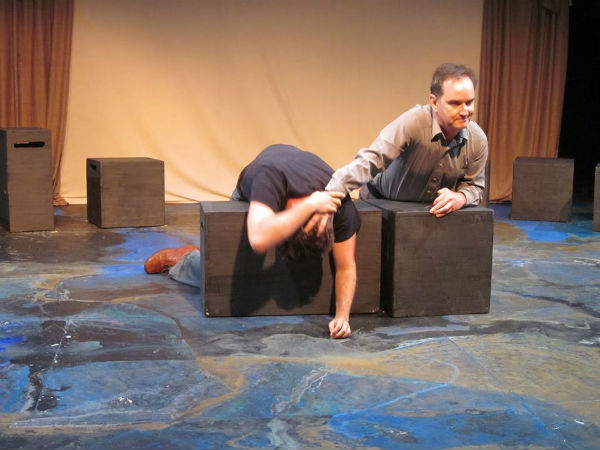 Umm, fishing for men, that is. 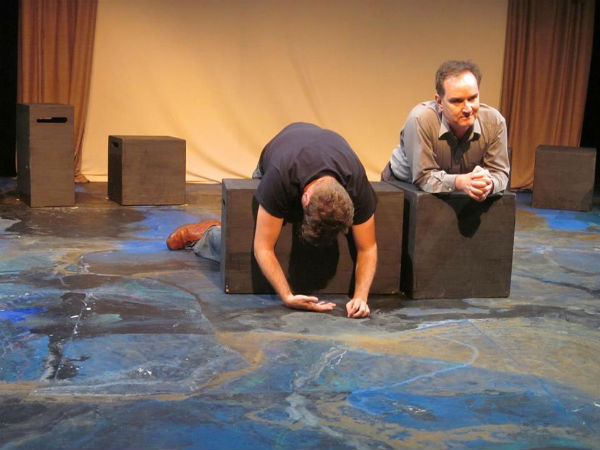 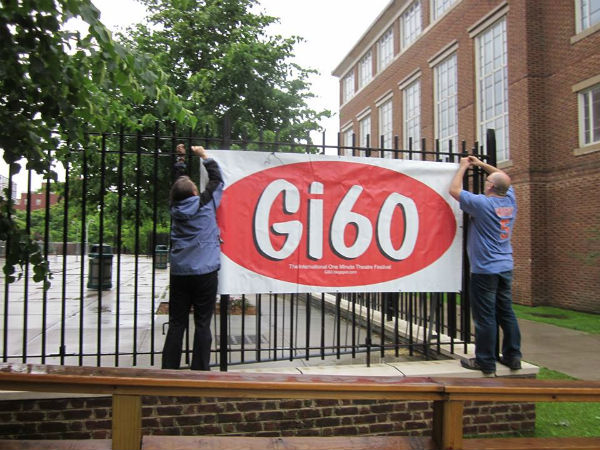 And lest we not forget those behind the scenes — and out in the rain!

Three scripts to be produced in the Gone in 60 Seconds Festival, UK edition

Posted by Dwayne Yancey in News, Productions on May 31, 2013

I will have three scripts produced next month in the U.K. edition of the “Gone in 60 Seconds” Festival of one-minute plays.

I already have one script slated for the U.S. version, which will be June 7-8 at Brooklyn College in New York. That script is “Fishing for Men.”

The U.K. version will be June 8 at the Viaduct Theatre, Dean Clough, Halifax, Great Britain.

Here are the three scripts that will be done:

THIS IS THE CAPTAIN SPEAKING
An airline pilot addresses his passengers, warning them of some danger ahead. Is he suicidal? Cast: One male.

THREE TREES TALKING
Three trees contemplate the question: If they were human, what kind of human would be they? Cast: Three, non-gender. Running time: One minute.

THE WHOLE WIDE WORLD
A man tries to compliment his girlfriend and promptly gets in in trouble, and his clarifications only make the matter worse. Cast: One male, one female. Running time: One minute.

“This is the Captain Speaking” and “The Whole Wide World” have previously been done as staged readings at No Shame Theatre in Roanoke, Virginia.

Posted by Dwayne Yancey in News, Productions, Uncategorized on May 16, 2013

I got word this week that my short script “Fishing for Men” has been accepted into this year’s Gone in 60 Seconds Festival.

This is an annual festival of one-minute plays, some of which are produced in New York, others in Great Britain.

“Fishing for Men” will be in the New York version, June 7-8 at Brooklyn College — details here. This will come a little more than week before another one of my scripts hits New York — the staged reading of my full-length script, “The Ballad of Alejandro Lopez,” on June 17 by the Barefoot Theatre Company.

You can find videos of some my previous work in earlier editions of the festival under the “video” category.

Here’s my synopsis of the script — which previously had a staged reading at No Shame Theatre in Roanoke, Va., in spring 2012:

FISHING FOR MEN
A brooding man sits by the water, waiting on a victim to come along. Cast: Two males.

Video: “Busier Than” at Gone in 60 Seconds Festival in U.K.

Posted by Dwayne Yancey in News, Productions, Uncategorized, Video on May 15, 2013

My short script “Busier Than” was produced in June 2012 at the U.K. branch of the Gone in 60 Seconds Festival of one-minute plays.

The video took longer to get up, but here ’tis.

Photos from “Deep Into October” at New York benefit

Posted by Dwayne Yancey in Photos, Productions, Uncategorized on January 14, 2013 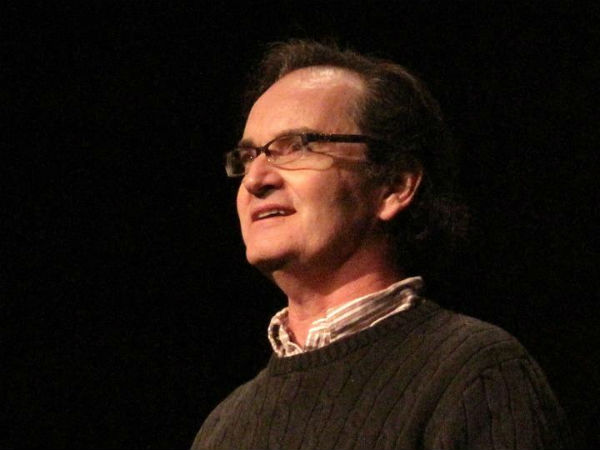 In December, two of my short baseball pieces were performed at the Cherry Lane Theatre in New York City in a benefit for Hurricane Sandy victims in The Rockaways section of Brooklyn.

Here are photos from one of those pieces, “Deep Into October.”

Mickey Ryan reprised his role from when this piece was originally performed in the Gone in 60 Seconds Festival in New York in 2011. You can find video of that performance here.

And here’s another photo of Mickey: END_OF_DOCUMENT_TOKEN_TO_BE_REPLACED