Feedback from staged reading of “Exiled To Texas”

I held a staged reading of my new comedy EXILED TO TEXAS on Saturday, March 12 at the Roanoke Children’s Theatre. It’s not a children’s script, that just happened to be the venue available, thanks to the generosity of artistic director Pat Wilhelms.

I do not have any photos — well, I have some but they’re pretty blurry. But I do have this happy feedback:

I really liked it. It was a great script.
— Chris S.

Thank you, Mr Yancey, for another hilarious script! Thoroughly enjoyable. Great job to the cast & fabulous director, Linsee Lewis! We had a great time.
— Heather S.

Thank you for caping off wife’s birthday with fun time!
— Robert T.

EXILED TO TEXAS
A teen-age Russian chess prodigy is sent, against her will, on an exchange trip to a small town in Texas, which hasn’t had a girl born there in the past twenty years. Svetlana is immediately drafted to serve as cheerleader for a football team that has never won a game. Meanwhile, her big sister back in Moscow runs an Internet scam for mail-order brides. East meets west, and comedy ensues. Cast: Six – five female, one male.

I held a staged reading of RHONDA’S HIGH-CLASS ROADKILL CHILI on Saturday, January 2, 2016 at Showtimers in Roanoke. Here are some photos. 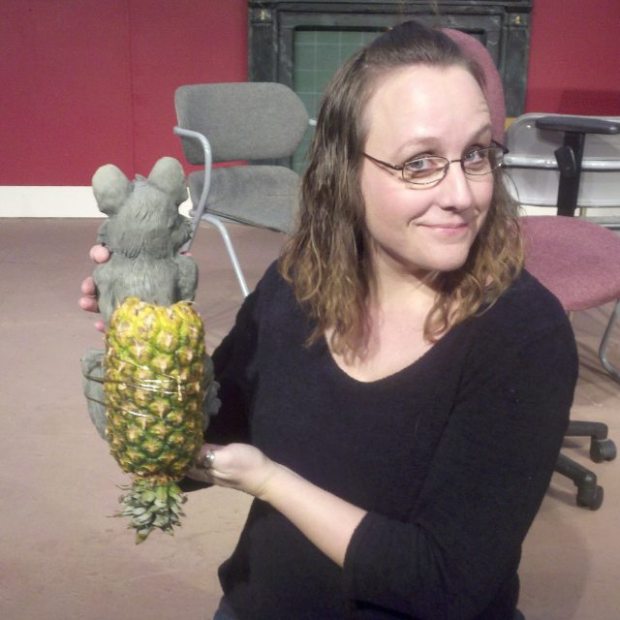 Heather Sexton shows how to make a stage armadillo — one plastic rat, one pineapple fajita, minus the fajita. And something to bind them together.

RHONDA’S HIGH-CLASS ROADKILL CHILI
Rhonda has never won anything in her life, so one of her sisters persuades her to enter a chili cook-off. Since time is tight, they decide on a roadkill recipe. Meanwhile, Rhonda’s husband is putting up Christmas lights out of season, because he’s determined to win the town contest that winter. When it turns out his light display is bright enough to be seen from outer space, things get more complicated. Aliens, and comedy, ensue. Cast: Nine, although two of those are bit parts at the end. The main cast is: Three adult females, two teen or pre-teen females, two adult males, and then the two small parts are two non-gender characters, although best played as males.