Q&A for my show at the Greenbrier Valley Theatre

Posted by Dwayne Yancey in News, Productions, Uncategorized on January 26, 2017

My ten-minute play THE PICTURE WINDOW is included in this year’s new works festival at the Greenbrier Valley Theatre in Lewisburg, West Virginia Feb. 2-4.

Here’s a Q&A with me and some of the other playwrights.

Audio of “Lucy” and three other short scripts

The radio station at Seattle Pacific University produced a bunch of my scripts earlier this year as radio plays on Falcon Radio Theatre.

The audio is just now becoming available. Here’s probably the biggest night of all — Feb. 7, 2013, when it was an entire night of Yancey.

The headline piece was the one-act “Lucy,” but the show also included the ten-minute piece “Somewhere Tonight, The Washington Senators Last Game Still Plays On” and the shorter pieces “The Liberal Arts Pirates” and “The Secret Lives of Goldfish: Pirates!”

LUCY
The devil wants a book written about herself — yes, herself — so shekidnaps a writer and brings him to hell for an interview. She explains whyshe’s a necessary evil; he tries to get out of the deal. A comedy, with varioustopical references. Cast: Four, plus an off-stage voice. One female, two males, one non-gender, although probably works best as a male. Still, you have can fun casting females in the two male roles. The off- stage voice is female.
• First place, 18th Annual Henrico Theatre Company Playwriting Contest,
2003. (Out of 163 entries nationwide.)
• Produced by Henrico Theatre Company, Richmond, Va., February 2004.
* Produced by the Shakespeare Club, Bangor, Maine, February 2010.
* Produced by Falcon Radio Theatre, KSPU, Seattle Pacific University, February 7, 2013.

SOMEWHERE TONIGHT, THE WASHINGTON SENATORS LAST GAME PLAYS ON
The last game the Washington Senators played – in 1971 – ended in a forfeit, when fans ran out onto the field and one of them stole first base. Now, on the night before a new Washington baseball team takes the field in 2005, the man who stole that base is trying to return it, and gets arrested. He tries to explain to the cop why the base is haunted. Cast: Two males, envisioned as one white, one black. Running time: Ten minutes.
* Produced by Falcon Radio Theatre, KSPU, Seattle Pacific University, February 7, 2013.

More photos from my staged reading in New York

My daughter, Rain, took this panorama shot of me outside the Cherry Lane Theatre. That’s Keith and Trina at right.

Here are some more photos related to my recent staged reading that the Barefoot Theatre Company in New York did of my full-length script “The Ballad of Alejandro Lopez.”

First, some other links if you want to catch up:
* Photos from rehearsal, production and the after-party
* Photos of the cast and show poster
* The original announcement about Barefoot doing a staged reading of my script

And now, more photos, mostly taken by me: END_OF_DOCUMENT_TOKEN_TO_BE_REPLACED

Photos from “The Ballad of Alejandro Lopez” in New York

The cast of “The Ballad of Alejandro Lopez” takes a curtain call.

The Barefoot Theatre Company in New York held a staged reading of my full-length script “The Ballad of Alejandro Lopez” on June 17, 2013 at the historic Cherry Lane Theatre in Manhattan. (Historic because it’s a stage where Edward Albee and Sam Shepard have also had some of their works debut.)

More details on the show here.

Here are some photos, courtesy of Barefoot. END_OF_DOCUMENT_TOKEN_TO_BE_REPLACED 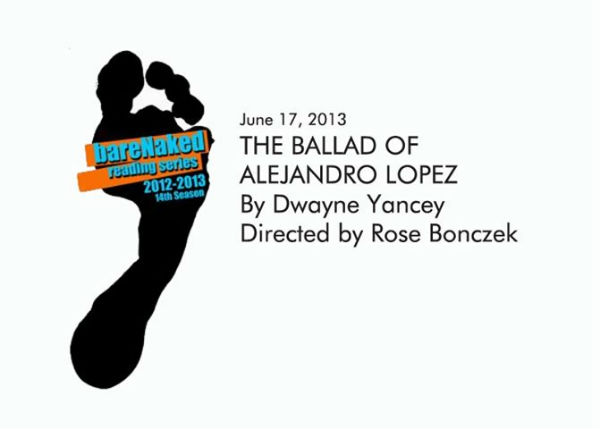 Poster for my show in New York.

The Barefoot Theatre Company in New York will hold a staged reading of my full-length script “The Ballad of Alejandro Lopez” on Monday, June 17 at the Cherry Lane Theatre in Manhattan.

Here’s a poster, and the cast.

Tickets are free, but you have to email barefootrsvp@aol.com to get on the list. Other details here.

The cast of “The Ballad of Alejandro Lopez.”

Posted by Dwayne Yancey in News, Productions, Uncategorized on May 10, 2013

I’m thrilled to announce that the Barefoot Theatre Company in New York to hold a staged reading of my full-length script “The Ballad of Alejandro Lopez” on June 17.

The particular details: It’s at 7 p.m. at The Loft near Broadway and East 3rd, specifically 682 Broadway, #5W.

UPDATE: The venue has changed. The reading will now be at the Cherry Lane Theatre, 38 Commerce Street. To get on the list, you need to email barefootrsvp@aol.com.

For those of you not familiar with Barefoot, it’s been described as a “scrappy, young Off-Off Broadway company” whose past productions have included the first stage adaptation of Sidney Lumet’s “Dog Day Afternoon” in 2008, and a revival of Lanford Wilson’s “Balm in Gilead” in 2005.

The Boston Globe has called it “a company to notice in New York.”

I’ve had one-minute pieces performed in New York in the Gone in 60 Seconds Festival, and some New York City high schools have produced some of my one-acts. But this is the first longer piece of mine to break into The Big Apple.

As for the script itself, it’s superficially about baseball, but really about immigration. Here’s my official synopsis:

THE BALLAD OF ALEJANDRO LOPEZ
A play about baseball – and immigration. The immigrant-hating and baseball-loving sheriff of a rural Texas county faces a dilemma when he discovers a Hispanic boy who can throw a 90-mile-per-hour fastball. Cast: Ten – four female, six male, but three of those males have small parts.