Quinn Thomas Kelly and Ny’kieria Blocker. Not sure which one is Melissa and which one is Paige. All photos courtesy of Jeff Croff.

The undertaker arrives to supervise.

About 10:30 Friday night I was emailed the prompts:

-Genre: Western
-Use at least one of these names: Chad, Melissa or Paige
-Words to use: Art, cheesemaking, urban and beat

Dialogue: “You can’t make me…” Or “It is if the cheese is talking”

Only real guidelines: ten minutes and you only have three actors.

By Saturday morning I had written and emailed in WAITING ON THE 10:15. I was under the impression all the teams were two women and one man, so I wrote it with two female gunfighters. Turns out my cast — randomly assigned — was two men and one woman so I’m guessing one of the guys played “Melissa.”

WAITING ON THE 10:15
Two female gunfighters appear to be ready to square off against one another in the streets of an old western town. They’re waiting on the undertaker to pronounce when it’s high noon – timed to the arrival of the 10:15 train, which is always late. We eventually learn, though, they were not gunfighters at all, but makers of cheese. Their batch of Swiss cheese hasn’t come out well, so they’re about to shoot holes in it. Cast: Three – two women, one man.
* Produced by Ixion Ensemble, Lansing, Michigan, Aug. 18, 2019, as part of a 24-hour play festival. 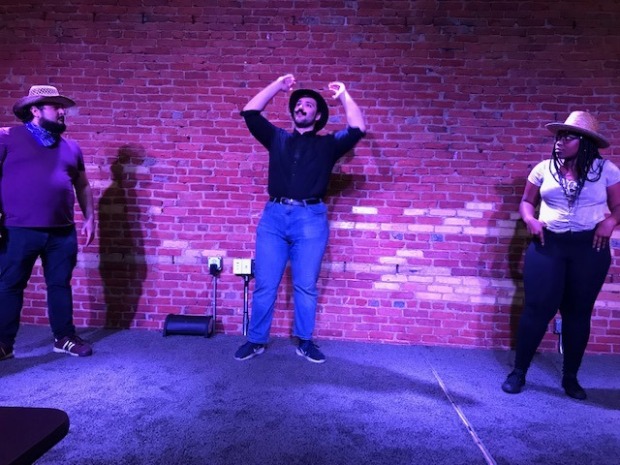 I wrote a very long and dramatic passage for the undertaker.

Undertaker and either Melissa or Paige.

This entry was posted on August 20, 2019, 11:54 pm and is filed under News, Photos, Productions, Uncategorized. You can follow any responses to this entry through RSS 2.0. You can leave a response, or trackback from your own site.