Review of ‘A Dickens of a Christmas’

Posted by Dwayne Yancey in News, Reviews, Uncategorized on November 18, 2020

The New Zealand playwright Rex McGregor has left this lovely review on the New Play Exchange for my Christmas full-length A DICKENS OF A CHRISTMAS:

“A delightful script with likable characters, witty dialogue and a twist I didn’t see coming.”

A DICKENS OF A CHRISTMAS
Two orphan girls in Victorian London desperately want a proper Christmas dinner. At first, they conspire to sneak into a private club and pass themselves off as men. Their plans are frustrated by a retired military man, and two fellow orphans. That’s when they devise another plan that involves the mean old rich woman at the end of the street. Cast: Six – three male, three female.

Here’s a video of a virtual reading of the script in September 2020.

Video reading of ‘A Dickens of a Christmas’

Posted by Dwayne Yancey in News, Uncategorized, Video on September 27, 2020

Our audience included former Rep. Bob Goodlatte of Roanoke (and his wife, Maryellen, both fans of live theatre) and from Auckland, New Zealand, playwright Rex McGregor. Theatre is a small world: Rex and I both had pieces in a monologue festival out of New York earlier this summer. Irene was one of the actresses we saw in that festival — and since then we’ve both recruited her for projects.

A DICKENS OF A CHRISTMAS
Two orphan girls in Victorian London desperately want a proper Christmas dinner. At first, they conspire to sneak into a private club and pass themselves off as men. Their plans are frustrated by a retired military man, and two fellow orphans. That’s when they devise another plan that involves the mean old rich woman at the end of the street. Cast: Six – three male, three female.

Video reading of ‘The Broken Angel’

On August 15, I held a Zoom reading of my Christmas play, THE BROKEN ANGEL, with a cast from Ontario.

THE BROKEN ANGEL
A Christmas story that involves a talking cat, a talking mouse, an angel and a newly-single mom and her son/daughter. Christmas is approaching and there’s not much joy for Riley (who can be anywhere from roughly 8-15). His/her parents have broken up and his/her mother says there’s not enough money for even a Christmas tree. Riley decides to fashion his/her own — out of beer cans salvaged from the trash, with sticks to serve as limbs. The mom is touched by this gesture, and, against her better judgement, agrees to hang ornaments on it — including a very old angel ornament that once belonged to her grandmother. The cat — who can talk to the audience, but no one else — tries to warn that this isn’t a good idea, but the humans don’t listen. The ornament falls and breaks, angering the mom, who orders Riley to bed while she tries to drink away her sorrows. It’s then that the broken ornament turns into a real angel, who tries to deliver an important message. Cast: Five. Two females, and three non-gender (including the child).

Photos from ‘The Girl Who Made Emus Believe They Could Fly’ in Mass.

Posted by Dwayne Yancey in News, Photos, Productions on June 12, 2020 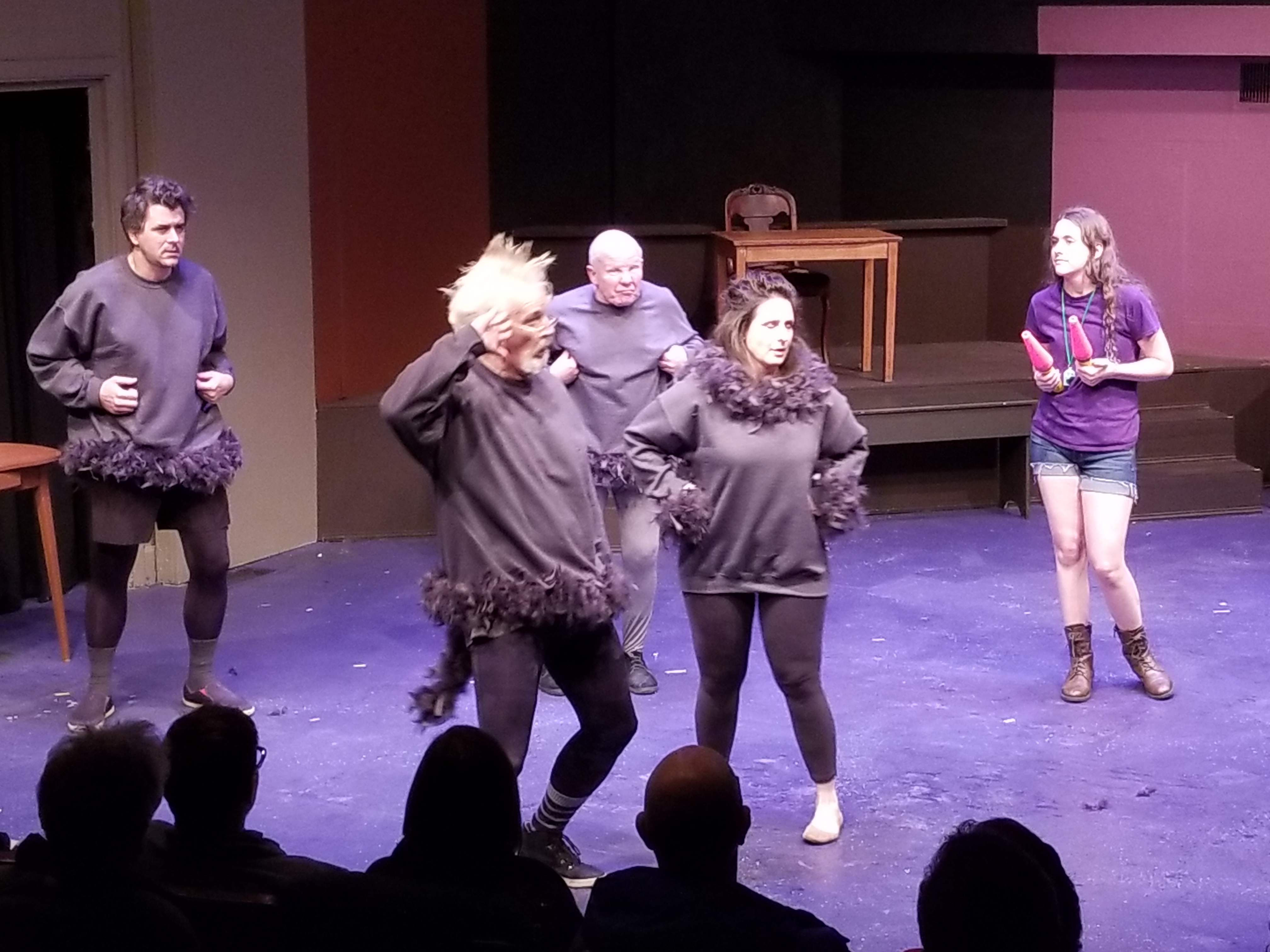 The Quannapowitt Players Suburban Holidays festival in Reading, Mass. produced my one-act
THE GIRL WHO MADE EMUS BELIEVE THEY COULD FLY in November and December 2019. Out of the blue, they sent me these photos with the note: “It was perhaps the best received play this year.”

‘Your play is terrific!”

Fellow playwright Melinda Gros recently attended the Quannapowitt Players Suburban Holidays festival in Reading, Massachusetts where my one-act THE GIRL WHO MADE EMUS BELIEVE THEY COULD FLY was produced Nov. 29-30, Dec. 1, 5-7, 2019. She sends this happy message:

“I saw the production this weekend – the company did a very nice job – and your play is terrific! I don’t know much about emus, but the actors made them very avian and hysterical, especially the ballet-dancing emu. Congrats!”

Photos from ‘Let There Be Lights!’ in Iowa

Posted by Dwayne Yancey in News, Photos, Productions on December 12, 2019

Mills Masquers Theatre in Glenwood, Iowa produced my one-act LET THERE BE LIGHTS! on Dec. 6-8, 13-15, 2019. Director Jeannie Lorimor sends this message and these photos: “We had an amazing turn out Friday and Saturday and we sold out our theater Sunday night! The kids did amazing! And I heard so many compliments on “Let there be Lights” The audience ate it up! One more weekend of shows to go. Friday and Saturday this week we still have seats but Sunday is filling up again and will most likely sell out again! Thank you for writing such an amazing piece! It has been a blast to direct!” You can find the full gallery here. 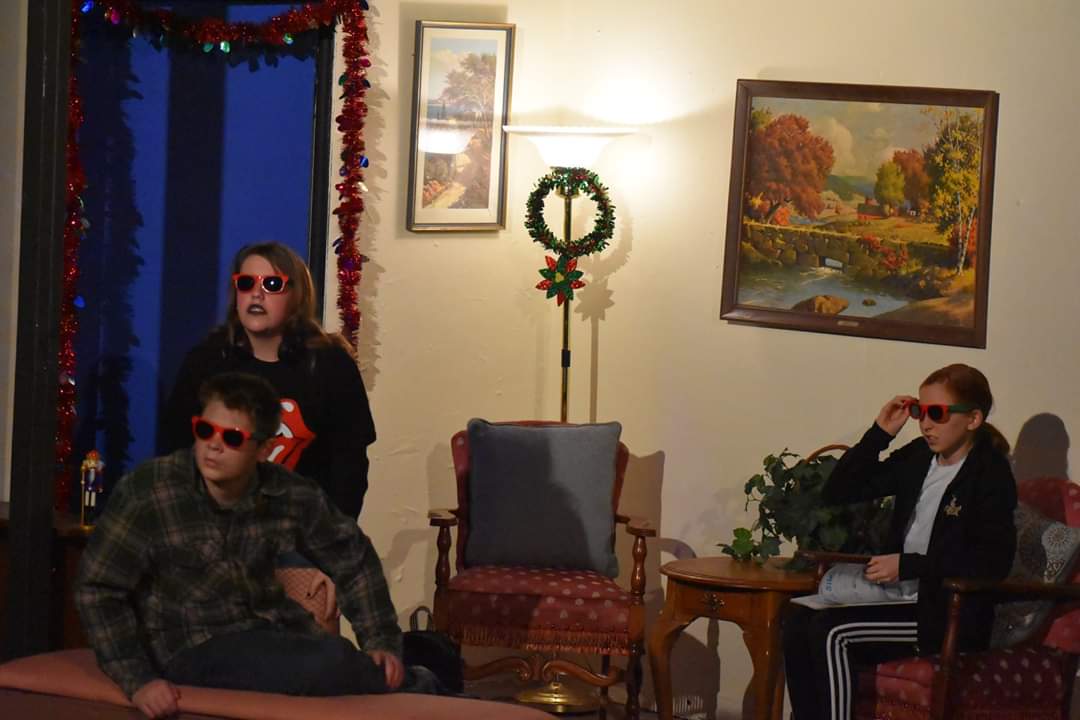 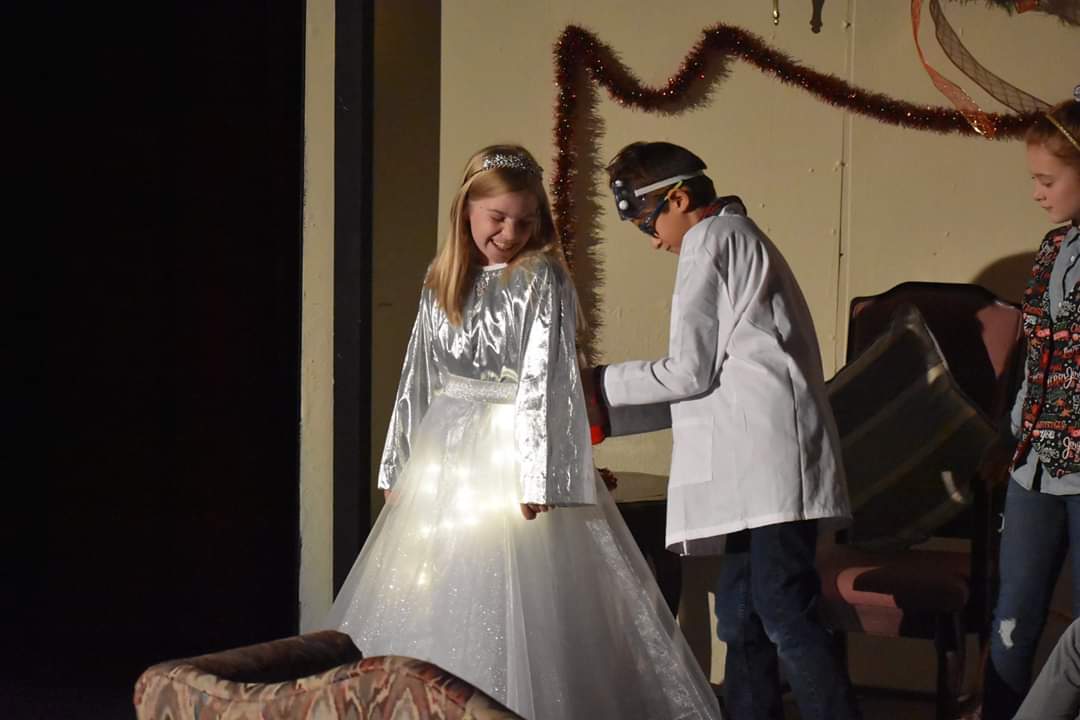 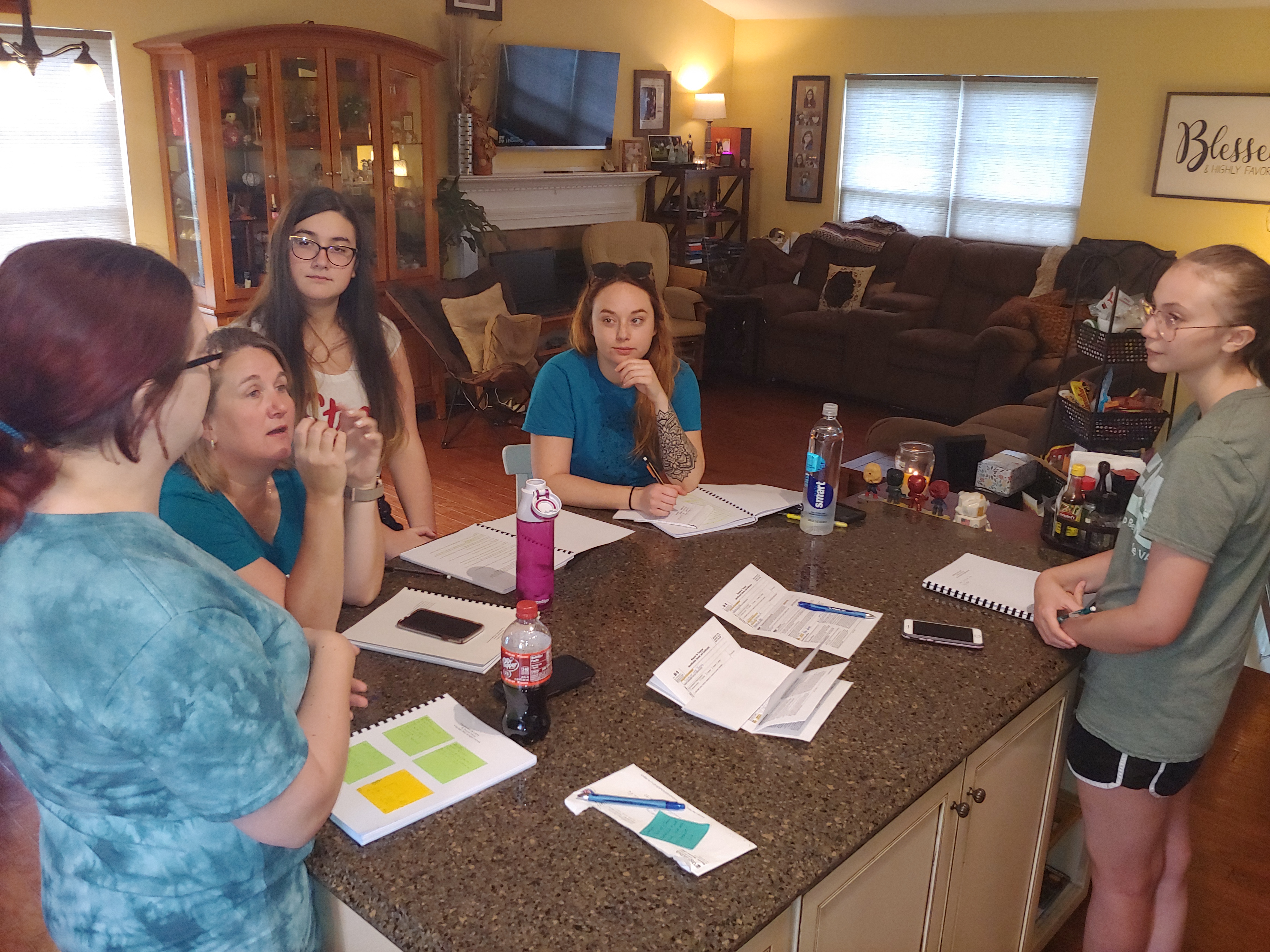 On Labor Day weekend, most people were probably thinking about the end of summer, or the beginning of fall, but my thoughts were on Christmas. We held the first rehearsal for my touring Christmas show, EXCHANGE OF GIFTS. Here are some photos.

By the way, our only Roanoke show is now SOLD OUT — three months before the event. 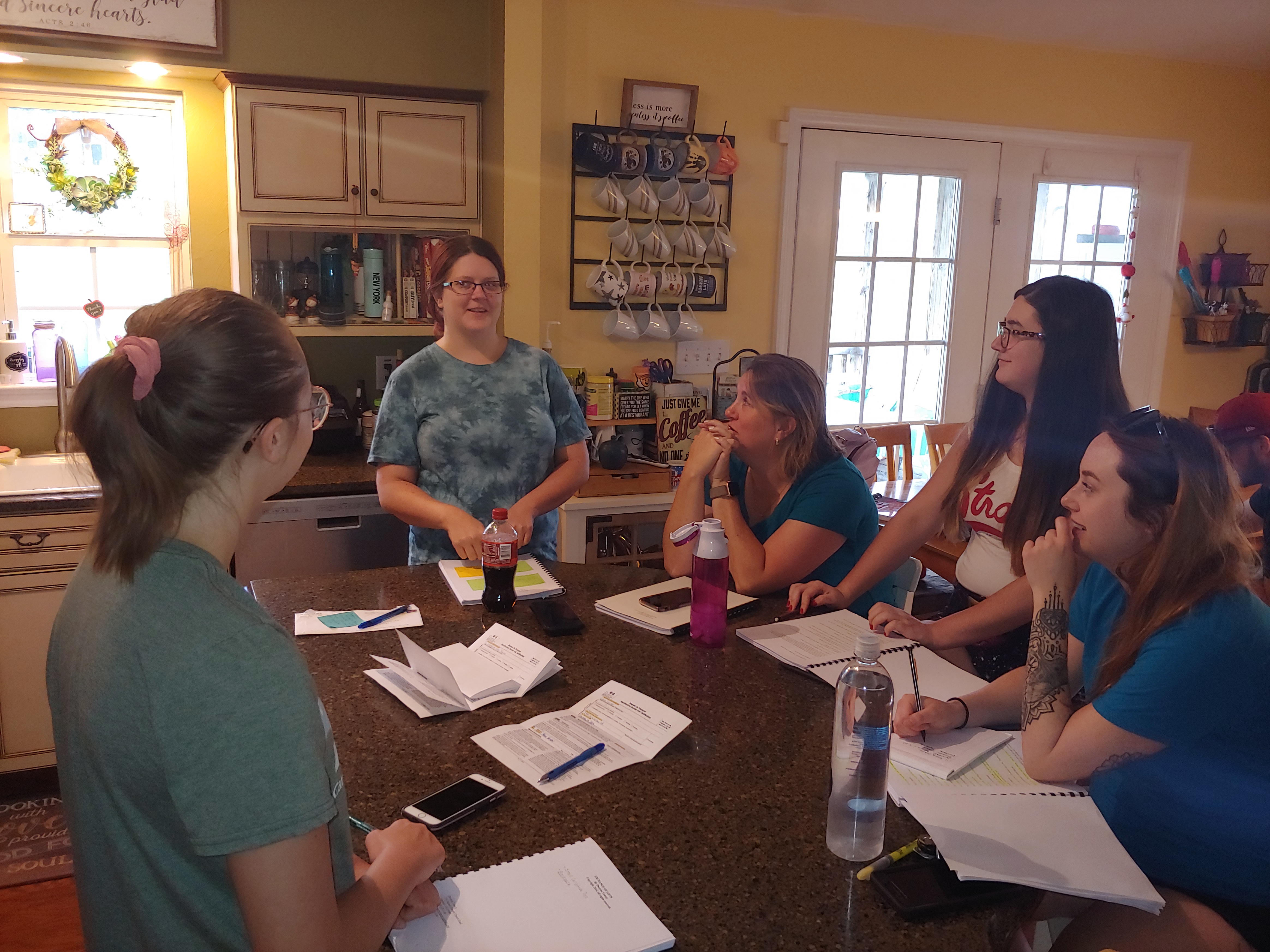 From the other side.

MORE ON EXCHANGE OF GIFTS:

* Full tour schedule and ticket info.
* Behind the scenes of the publicity photos.

‘Exchange of Gifts’ tour 2019: Behind the scenes

Posted by Dwayne Yancey in News, Photos, Uncategorized on August 2, 2019

Here are some behind-the-scenes photos from the June 30 photo shoot for the publicity photos for EXCHANGE OF GIFTS, the Christmas tour that will be touring Virginia in December. Full list of dates here.

Cast and crew walking down Campbell Avenue en route to our photo location. It’s 90-plus and Lyndsey is in full winter garb.

Review for ‘The One-Word Christmas Carol’

Posted by Dwayne Yancey in News, Reviews, Uncategorized on January 5, 2019

Here’s a review for my short Christmas play THE ONE-WORD CHRISTMAS CAROL that was posted on the New Play Exchange:

“If you haven’t partaken of Yancey’s one-word classics, they are a treat and this is a good place to start. Dickens himself would be proud. I particularly liked this glimpse into Belle’s family, and of course Scrooge’s back and forth with the Christmas ghosts always delight. Yancey makes it look deceptively easy but don’t be fooled, it’s HARD selecting the exactly right single word at a time to convey the spirit of a timeless story, move the plot forward and still have the entire project feel fresh and vibrant. Yancey is just the man for the undertaking.”
— Matthew Weaver

THE ONE-WORD CHRISTMAS CAROL
The traditional Christmas Carol story, more or less, told with each actor speaking a line of just a single word. Cast: Can be done with as few as six, or expanded larger, if you desire. With six, 4 male, 1 female, 1 non-gender. Feel free, of course, to use non-traditional casting.

Video of ‘On the Thirteenth Day of Christmas’ in Colorado

Fountain Community Theater in Fountain, Colorado produced my full-length script ON THE THIRTEENTH DAY OF CHRISTMAS in December 2018. Here’s some video of the show. And here are some rehearsal photos.

OTHER PRODUCTIONS OF ON THE THIRTEENTH DAY OF CHRISTMAS

dwayneyancey
Create a free website or blog at WordPress.com.