Photos from reading of ‘Extracted’ in New York

Equity Library Theater of New York hosted a reading of my full-length play EXTRACTED in New York on Nov. 16. The reading was directed by Alexandra Scordato. Actor Paul Weissman paid me what I thought was the ultimate compliment: When he met me, he said he was surprised. He said he assumed that, based on the hip dialogue, the writer was in his early 30s. I’ll take that anyday! Next up: Revisions! 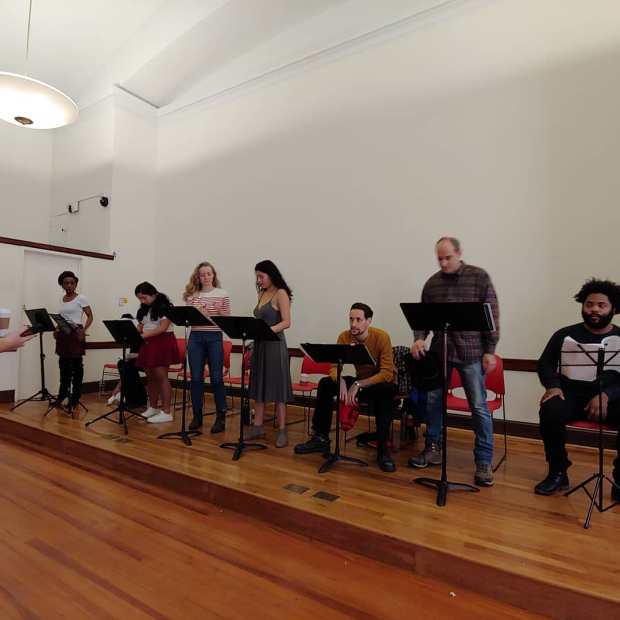 Here’s a better view of Esh Red, who played Dominique. She’s at left, casting an eye on Sam and Libby.

More photos (and commentary) below:

And here’s a better view of Paul Weissman as Gordon (in the cowboy hat).

Unlike most of my scripts, this one is very political.

EXTRACTED
A dark allegorical tale about modern politics and immigration. An American truck driver sleeping in his cab at a truckstop in southern California is awoken by two teenage girls, Sam and Libby. He thinks they’re truckstop prostitutes and tries to run them away. Instead, Sam explains that she has rescued her sister from drug gangs in Los Angeles and is trying to take her home to safety in New York. The rescued sister is our allegorical Statue of Liberty. In fact, Libby has not been rescued; she has been drugged against her will, for reciting — and practicing — the poem at the statue’s base: “give me your tired, your poor . . . ” As the roadtrip across North American unfolds, we see that the older sister Sam is not, in fact, a protector and rescuer, but rather her kidnapper, who is trying to brainwash her. Along the way, they keep running into another truck driver, who is taking the same route across the country, and a mysterious woman. In the climactic scene, Sam has hired a tattoo artist to blot out “The New Colossus” poem that Libby has tattooed on her. Just then the two mystery figures burst in — revealing themselves to be special agents for the Royal Canadian Mounted Police, who are mounting a hostage rescue and extraction to take Libby to safety in Canada. They are joined by a Mexican intelligence agent, as well, who they had previously met along the way at a truckstop. Cast: Eight — Five female (including who can pass for teens, and one Latina adult), three male.

* Logo by Julia Allan (the Australian artist who designed the poster for my 2018 show in Melbourne, THIS ROSE HAS THORNS.
* Review for “Extracted” on New Play Exchange by Royal Shiree
* “Extracted” is semi-finalist in Austin competition

This entry was posted on November 28, 2019, 12:01 am and is filed under News, Photos, Productions, Uncategorized. You can follow any responses to this entry through RSS 2.0. You can leave a response, or trackback from your own site.