While taking my morning walk last Saturday, I came upon a startling sight: A hornet’s nest lying in the road, brought down by a storm the previous.

Thankfully, this was an old nest, unoccupied for some time. (I’d been keeping an eye on it as I walked under it each morning, just to be sure.)

Naturally, I did what everyone does these days. I took a picture of it with my phone, and zapped it out to Instagram, Twitter and Facebook. On the latter, it produced much chatter, including this high praise from a New York actor I know: “Hornet nests seem an apt metaphor for your plays: complex, beautifully structured, fascinating and vaguely dangerous. Although I’ve never found hornet nests to be as funny as I find your writing. Hornets need to work on that.”

As I note in the screen capture, hornet’s nest figure in both THE BALLAD OF ALEJANDRO LOPEZ and SOFTBALL IS LIFE. In the former, a young boy’s pitching prowess is discovered when he hurls a rock through a hornet’s nest. In the latter, a high school principal tries to solve two problems at once — the softball coach refuses to recognize a girl’s throwing skills, and the neighboring landlord refuses to remove a hornet’s nest near the school grounds. You can probably guess how that goes.

Here’s the nest, if you’re curious: 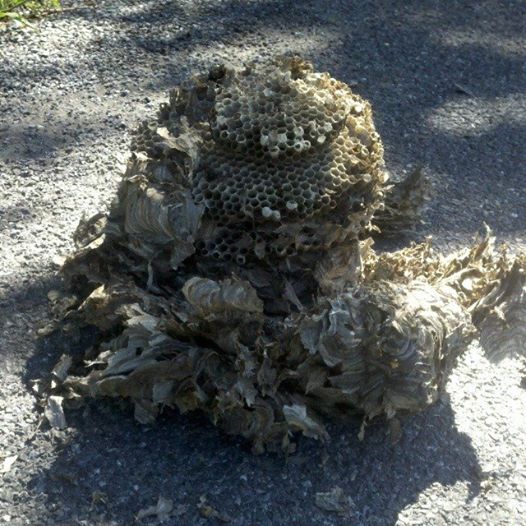 A hornet’s nest, fallen from the sky! Or, at least a tree.

This entry was posted on June 19, 2014, 9:01 pm and is filed under News, Reviews, Uncategorized. You can follow any responses to this entry through RSS 2.0. You can leave a response, or trackback from your own site.