Photos from staged reading of “Softball Is Life”

Larsen (played by Emma Sala) gets ready to throw a softball through a hornet’s nest, under the glaring eye of Mr. Barnett (Patrick Kennerly), the hard-hearted science teacher and softball coach and the hopeful eye of Kristin Turner (Kelly Anglim), the soft-hearted principal who hopes the feat will show the coach the troublesome student has a gift.

My latest full-length script, “Softball Is Life,” had a very successful staged reading on January 4, 2014 at Showtimers community theatre in Roanoke, Virginia. Strong performances, strong turn-out, plus I came away with a list of small tweaks to make to the script.

My goal with “Softball Is Life” was to write a sports play for women. This isn’t really a sports play, though. Except for the opening scene, the entire play takes place outside softball season. It’s really about family relationships. A former high school softball star sits in prison, estranged from her 14-year-old daughter who shares her mother’s talent for pitching but doesn’t realize it. Instead, the girl lives in fear of the creepy boyfriend of the cousin she’s living with. The script is set mostly in 1994-95, with a few flashbacks to 1979.

Melora Kordos, former artistic director of Studio Roanoke who is now active in Lynchburg theatre, came to town to direct the reading.

I have video of the reading here with a complete photo gallery here.

Here are some key shots below: 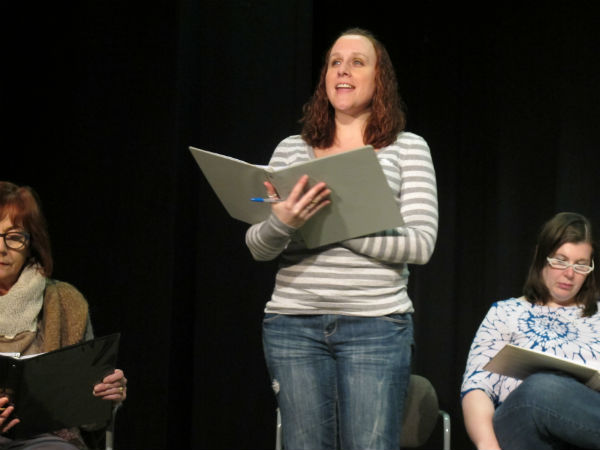 Heather Sexton as Linda, the former high school softball star now in prison. She pitched a perfect game in the state semi-finals in 1979, but the state championship game was cancelled due to the gas crisis. She hasn’t gotten over this.

Kristin, the new school prnicipal (played by Kelly Anglim) counsels Larsen, a troublemaking high school freshman — and the daughter of the former softball star. (Emma Sala.) Baseball fans will recognize the name Larsen from Don Larsen, who famously pitched a perfect game in the 1956 World Series. That’s who the girl was named after.

Stevie Holcomb as the prison guard who makes inmates life difficult — but who softens toward Linda (played by Heather Sexton) when she realizes how much Linda wants to reconnect with her daughter. 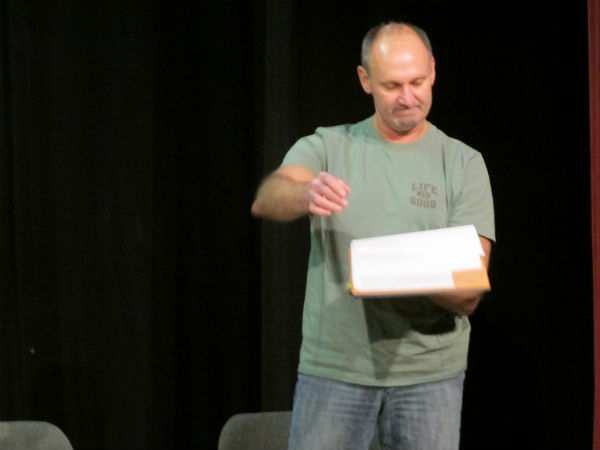 Squirrel is the creepy boyfriend of the cousin that 14-year-old Larsen is now living with. Here, Squirrel (played by James Honaker) sets fire to one of LInda’s letters to her daughter so the girl doesn’t know the mom is trying to contact her. 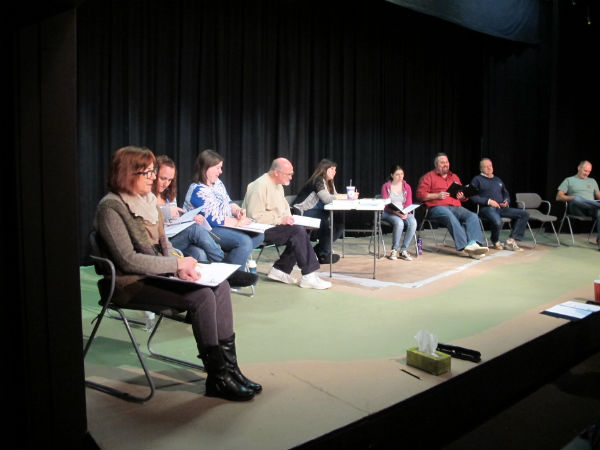 Larsen (Emma Sala) is failing science. Her grade depends on her science fair project. The principal (Kelly Anglim) tales Larsen under her wing and arranges for her to do a project designed to get the eye of the science teacher/softball coach (Patrick Kennerly)– throwing a softball through a hornet’s nest just outside school property that the landowner has refused to remove. 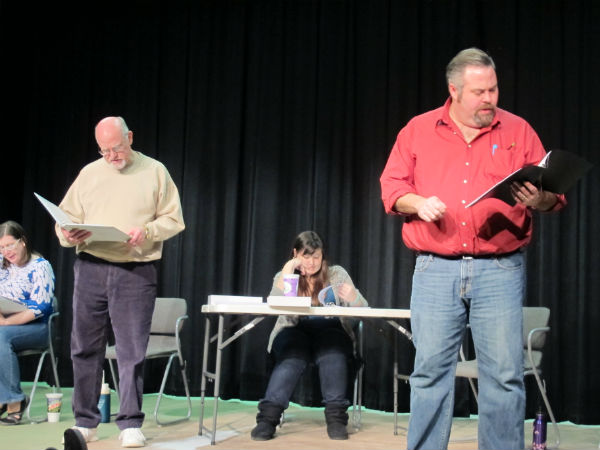 The custodian (Jeff Price, at right) unlocks the supply closet for Mr. Barnett (Patrick Kennerly) so the coach can do an equipment inventory before the start of the season.

Mr. Barnett (Patrick Kennerly) confronts Larsen (Emma Sala) when he catches her trying to steal a bat from the supply closet. What he doesn’t realize yet is, she wants it for self-defense against Squirrel.

The fight scene begins, as Squirrel (James Honaker) attempts to assault Larsen (Emma Sala.) She responds by beating him nearly to death with a bat — and then runs away. At left is Gary Reid, who played Mr.Wellington, the former high school principal.

The prison guard (Stevie Holcomb, at right) breaks the news to inmate Linda (Heather Sexton) that her daughter has gone missing, and the sheriff is on the phone to talk to her.

The audience arrives for the reading.

This entry was posted on January 7, 2014, 11:59 pm and is filed under News, Photos, Productions, Uncategorized. You can follow any responses to this entry through RSS 2.0. You can leave a response, or trackback from your own site.