One of my short pieces included in festival of “subversive” works 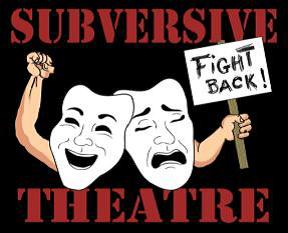 I guess I’m officially a subversive.

One of my short pieces has been accepted into this year’s “Subversive Shorts” show at the Subversive Theatre Collective in Buffalo, N.Y., a theatre whose motto is “Ten Years of Fightin’ the Man.”

My piece is “A Woman’s Word Versus A Machine,” a dark science-fiction piece in which I channel my inner feminist.

The festival is June 13-July 7, with different shows on alternating nights.

One of the other playwrights featured in the show is the acclaimed Rich Orloff, so I’m in quite good company.

This is the second time I’ve had my work included in the Subversive Shorts. In 2009, the theatre produced my ten-minute script “The Beautiful Ogre and Other Fairy Tales.”

Here are descriptions of both:

A WOMAN’S WORD VERSUS A MACHINE
A dark, serious piece about rape. A woman alleges she was assaulted by her household robot. But the company claims it was not a fault of product design. Cast: Two — one male, one female. Running time: Five minutes.
• Staged reading at No Shame Theatre, Roanoke, Va., spring 2012.

THE BEAUTIFUL OGRE AND OTHER FAIRY TALES
A father reads his daughter a fairy tale as a bedtime story — which the characters begin to act out. The girl doesn’t like how the story is going — no strong female role models, for instance — so she changes it all around. This is the result. Cast: Five — three males, two females. Running time: Eight minutes.
• Produced by the Paw Paw Village Players, Paw Paw, Michigan, Feb. 15-16, 22-23, 2008.
• Produced by Youth Education on Stage Summer Shorts, Williston, North Dakota, June 24-26, 2008.
• Produced by Subversive Theatre, Buffalo, N.Y., various nights between May 2-17, 2009.
• Produced by Play’n’Well Players, Plainview, Michigan, last weekend of May 2009.

This entry was posted on June 7, 2013, 8:15 pm and is filed under News, Productions, Uncategorized. You can follow any responses to this entry through RSS 2.0. You can leave a response, or trackback from your own site.