“Hamlet Goes Hollywood” to be published 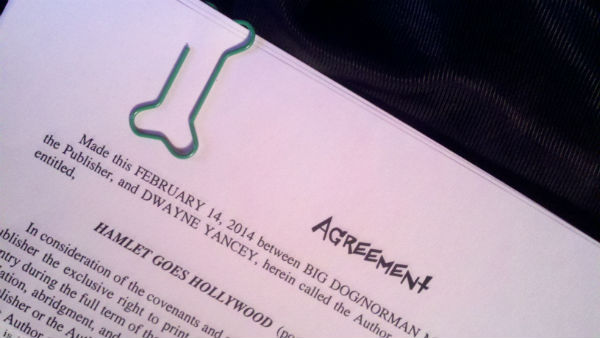 I got word this week that my hour-long one-act “Hamlet Goes Hollywood” will be published later this year by Big Dog Plays.

That’s the same publishing house that has published some of my other scripts, including “Santa Claustrophobia,” which has been produced 17 times. (Others from Big Dog include “Spiders” and “Red, Ripe and Round”; you can find my complete list of 0ne-acts, published and unpublished here, with this explanation of why I don’t charge royalties for unpublished work.)

Here’s the synopsis of “Hamlet Goes Hollywood,” coming soon to a play catalog near you (and, I hope, some high school stages):

HAMLET GOES HOLLYWOOD
Shakespeare himself is on the set of a Hollywood production of “Hamlet” when the director decides a few modest script changes are in order. Shakespeare objects, the director decides to experiment with setting the show in different genres — police show, science fiction, western, and so forth. The costumes keep changing, as do some of the characters. Ophelia clamors for a role with a sword, Laertes wants a bigger part, and Shakespeare himself eventually tries a rap version. Cast: 20 — 8 males, 4 female, 8 non-gender. Running time: One hour.

This entry was posted on February 25, 2014, 11:41 pm and is filed under News, Uncategorized. You can follow any responses to this entry through RSS 2.0. You can leave a response, or trackback from your own site.