Video: “The Dead Horse” at the Liminal artspace

The Liminal artspace in Roanoke — attached to Community High School of Arts & Academics — hosts monthly readings. Most of the participants are short story writers, novelists, or poets — so my theatrical pieces there are definitely out of the ordinary.

At the most recent reading on January 24, I offered up two pieces, which were both performed by Community High School students.

Here are Joe Hart, Ashley Meador and DaQuan Saunders performing “The Dead Horse,” an absurdist piece of mine. This is the five-minute version; I’ve also developed it into a one-act, with a larger cast.

Thanks to Cara Modisett, the organizer, who helped round up the students.

And thanks to my wife, Katerina, for the unique prop. The dead horse here was first created as a Halloween costume for my son, Keith, many years ago. It’s put together so a small child (which is what Keith was then) could fit inside of it, with the body of the horse around him — a convenient way to both ride the horse, and still go trick-or-treating.

In more recent times, the horse has found new life as a theatrical prop. He first appeared in this piece at No Shame Theatre. As I told the kids when I showed it to them, “he knows his part.”

I’ll post video of the other piece, “Pandora and Schrodinger: What’s in the Box?” when it becomes available.

UPDATED: I realize the video doesn’t have a good view of the horse, since the horse is on the ground. So here’s the beast himself: 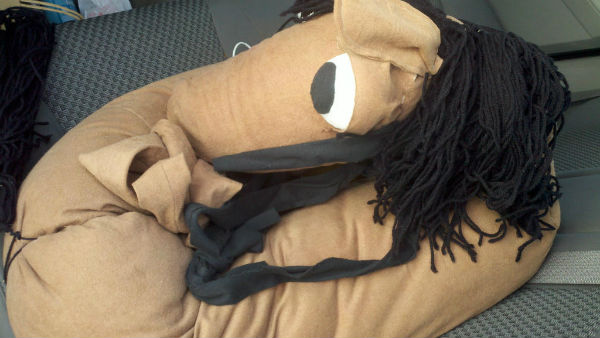 Horsie. From Halloween costume to valued stage prop as namesake of “The Dead Horse.”

This entry was posted on February 9, 2013, 1:00 am and is filed under News, Productions, Uncategorized, Video. You can follow any responses to this entry through RSS 2.0. You can leave a response, or trackback from your own site.