Photos from Saturday’s rehearsal for “Klaus”

The staged reading of “Klaus,” my Christmas show about the origins of Santa Claus, continues to take shape. .

The reading is Sunday, Dec. 16 at 6 p.m. at the June M. McBroom Theatre at Community High School in Roanoke, Va.; the reading is put on by the Hollins Playwright’s’ Lab.

Earlier, I posted photos from Thursday’s rehearsal and Friday’s rehearsal. Here are some photos from Saturday’s rehearsal, which emphasis on Brian O’Sullivan, who plays the titular role of Professor Klaus, a mysterious German physics professor who shows up at a failing British college in the 1740s and sets tongues wagging with his strange ideas. 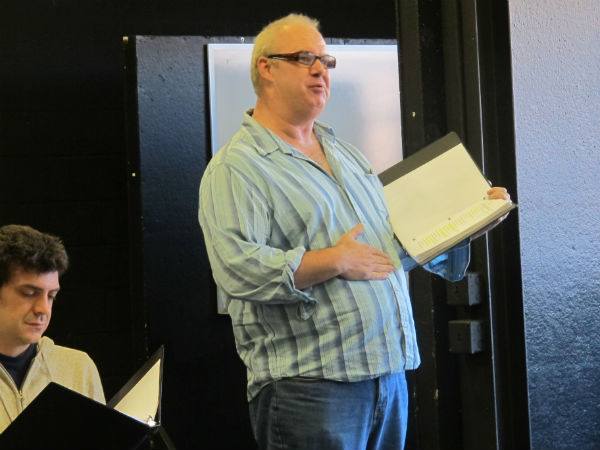 Klaus (played by Brian O’Sullivan) jokes about his girth to the class he’s teaching at a woebegone British college in the 1700s. 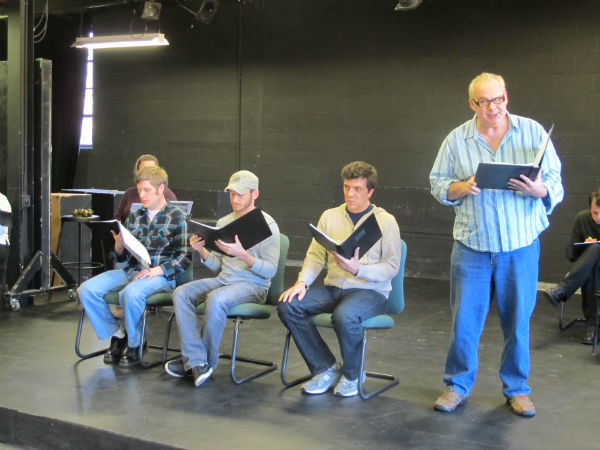 Klaus enjoys teaching natural philosophy (as physics was called in those days), but his students — played by Kevin McAlexander, Blair Peyton and Will Coleman — are less amused.

Klaus with his students again. I believe this is the scene where many of them (especially Percy, played by Blair, in the center) have shown up with hangovers. Either that, or it’s a scene in the ale-house where the students spend much of their time.

Klaus with Horace Grinchley (played by Drew Dowdy), the officious assistant to the headmaster.

Klaus and Grinchley again. Drew Dowdy is a master of facial expressions.

Mary the landlady (Martha Boswell) and Grinchley. He’s come to inquire about her lodger, Professor Klaus.

This entry was posted on December 15, 2012, 10:21 pm and is filed under News, Photos, Productions, Uncategorized. You can follow any responses to this entry through RSS 2.0. You can leave a response, or trackback from your own site.